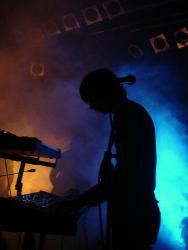 Of the list options, D just sounds cooler than all the rest. With a name like “Sleepy Eyes of Death” my first thought was that they must sound like some sort of Gwar-Slayer love child. I was pleasantly surprised when I picked up their record and discovered not screaming and praise for Satan, but an excellent M83-meets-Mogwai type of instrumental prog rock. Never one for big productions on Halloween, when I found out that Sleepy Eyes were playing at the Sunset on the great pagan holiday, my plan was set.

I’ve been to my fair share of shows at the Sunset, and I’ve seen plenty of local bands all over Seattle. For the most part, and I know this isn’t a sentiment that most people will cop to, I think that local bands, all sound like… local bands. From my experience there are really three types of local bands:

The hobby band. These bands are generally made up of people who have decent day jobs, maybe even careers. The play in a band because they enjoy music and have the creative ability and talent to make it work.

The in-a-band bands. These bands are made up of people who have always, and will always, be in a band. They enjoy the street cred that comes with being in a band and make the rounds playing local shows where they are often allowed to drink for free (sweet!) due to their long standing relationships with promoters, club owners, other members of “in a band” type of local bands.

The local-for-now band. This is the rarest form of local band. These bands go the extra mile with their performance and professionalism and really work at their craft. They are generally the band with the longest sound checks and the tightest sets. Often times these bands are characterized by effort. They do the little things that lead to success.

Note: It is entirely possible for the hobby band or the in-a-band band to become local-for-now bands. These groups are not definitive and often time bands will move in between all three types intermittently.

From my experience at the Susnset on Halloween, I would put Sleepy Eyes of Death in category three. They played a tight set that sounded like it came right off the record (except that I don’t normally play albums at the ear splitting level that the Sunset always provides). With a band that uses a lot of electronic instrumentation interwoven with live instruments, there are a lot of ways to mess up. Sleepy Eyes didn’t miss a beat as they ripped through their short set. The stage was awash in fog as they played, adding an extra element of stage production that one would normally see from a national touring band.

It’s easy for a band to show up and give a half-ass performance. We’ve all seen it plenty of times and that’s what separates the good bands from the mediocre ones. Sleepy Eyes of Death put the effort in and on this night, it showed.