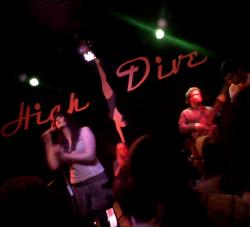 On most weekends, nightclubs in Fremont are rarely vacant, and usually pretty close to full. The booking is largely irrelevant. Still, if a band is nervous about playing to a small crowd for their CD release, a Friday night booking at the High Dive makes sense.

For the Kindness Kind, a terrific local indie-pop band, that was the route they chose to celebrate the release of their first LP, The Novel. Even with this show starting unusually late (the Kindness Kind finally started playing at 12:30 am), the High Dive was packed – uncomfortably so. I don’t know if the show was sold out, but you could not fit too many more people in the club. While it made it difficult to access the bar and restrooms, it must have been a good feeling for the band to see so many people at their show.

When they did finally start playing, the band played nine songs from The Novel, with the set lasting for around 45 minutes. The band was tight and hit most of their notes, playing behind an almost Phil Spector-like “Wall of Sound." Unfortunately, the sound mixing was off and it was difficult to hear the immensely likeable but soft-spoken lead singer Alessandra Rose. She started out seemingly nervous but grew more confident as the set went on. I wish she would have asked for more vocals in the monitors, but that's a minor quibble. Moreover, it would have been difficult to replicate the mixing on the album in a live setting, where Rose’s harmonies are crystal-clear but not overwhelming. Live, I preferred the ballads like “Roadmaps and Guidebooks,” “The Waiting Room,” and “I Pilot” because they gave Rose’s voice the opportunity to be heard.

The record itself is a collection of Cure or Smiths-influenced personal pop songs, with a few hints of trip hop thrown in for good measure. Songs like “Street Song” and “Midnight Flights” work so well because they have a tension that continues to build, driven by guitars and complimented by the vocals. The electronic samples and effects accentuate the lyrics and are not a distraction from them. The songs were well-written and put together nicely. Everything noticeable on the album (instrumentation, vocals, songwriting, production, etc…) really does seem to click.

Even though I complain about how the sound was mixed (no doubt spoiled by the countless nights I’ve witnessed Jim Anderson engineer sound at the Crocodile), this show should very much be considered a triumph for the Kindness Kind. They played to a packed house with lots of their friends in attendance and had fun doing it. Moreover, this is not a show for a cranky writer to nitpick over details. It was a night to celebrate the time and hard work that went into creating a very strong debut album. It was the Kindness Kind’s night, not mine.