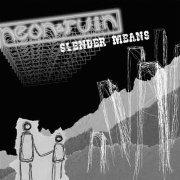 Slender Means, a five-piece Seattle band who formed in 2003, have created a great debut record with an identifiable, significant sound.

Frontman Josh Dawson wrote all the songs on Neon & Ruin. Joining his vocals and guitar work are Sonny Votolato (guitars/vocals; and one of the many talented Votolato brothers who grace our local music scene), Paul Pugliese (bass), Eric Wennberg (drums) and David Martin (keys). The result is a wicked-happy half-hour of pleasant British-inspired pop, matched with top-notch production under the hands of Martin Feveyear and the band.

Slender Means' tunes are smart, if succinct, with each track falling safely within the three-minute radio single range. Track-on-track, Neon & Ruin consistently belts out swift kicks of radio-friendly tunes rarely seen on a debut release. The polished production work gleams, deftly exhibiting the striking instrumentation, dexterous song-writing, and Dawson's nearly-perfect vocals, which fall somewhere between Tim Booth (of James) and Rufus Wainright. The record sounds so professional — which results in great overall continuity of sound — though at times it leads to moments that lack diversity of music tone and chord progressions. One senses that with a bit more time, Slender Means will tap into something bombastic within their orchestrated glory, something that could truly propel them to into the realm of spectacular.

Top moments on Neon & Ruin include "Hidden Grove" and the galloping and glorious "I Could Be Cruel." "Van Gogh," the first single, features blissful melodies and 50's-style backup vocals abiding alongside Dawson's swoon-worthy croon as he sings about making his mother proud. There's a strange blip half-way through "Molecules," when Dawson inexplicably bridges into Madonna's "Like a Virgin" (whoa oh oh oh oh oh), but it's forgivable (bordering on hilarious).

With their pitch-perfect harmonies, buoyant melodies, and good looks to boot, Slender Means are ripe for success. Neon & Ruin is simply one of the most pop-perfect local albums of the year.