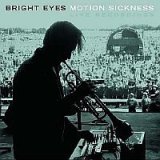 Get out your #2 pencil and clear off your desk and prepare to answer this question:

Which of the following is needed to become a true musical icon?

Time's up! Any guess? If you answered "All of the above," then you pass! Conor Oberst is the closest our generation has to a true independent rock and roll icon, akin to Cash in the 50's, Dylan in the 60's, Neil Young in the 70's, Michael Stipe (or Bono) in the 80's and Kurt Cobain in the 90's. Bright Eyes has gone from the ultimate lo-fi sad bastard band for lonely and solemn teenagers, to what could almost be considered the "voice of a generation" that is lost between the 90's consumer bubble and the 00's Bushite uncertainty.

Motion Sickness is officially the third Bright Eyes album to come out this year, after the dual release of I'm Wide Awake It's Morning and Digital Ash in a Digital Urn (maybe prolific album production should be included the quiz?), but this disc is solely a live endeavor. The album draws from Bright Eyes' tour supporting the more countrified Wide Awake album and captures the intensity of your typical Bright Eyes show, where Conor bares himself to his audience members as if they were his best friends and confidants. It bookends what was a very busy year for Conor and the band.

What makes Motion Sickness so strong is that sense of intimacy: we not only hear the songs, but we can hear individual voices in the crowd, we can hear the little quips that Conor offers. The bittersweet humor of the "short" version of "Make War" that consists only of Our love is dead is more telling than Conor might admit, but then he converts into the longing and regret of full version Return, return to the person that you were/and I will do the same. It's these kinds of interchanges that make you feel the foundation of Conor's musical inspirations.

Conor has the ability to convey an immense amount of feeling in his voice, even though it isn't the strongest. His natural vocal quiver lends itself to intimacy rather than arena rock. "Landlocked Blues," a song that could already reduce almost anyone (including me) to a blubbering heap, sounds so exposed and raw as Conor sings with only his strummed guitar accompaniment. This is where you can hear why, although 95% of Bright Eyes fans have probably never even exchanged a word with Conor, they can feel that they have shared something personal with the man. The same can be said for "Southern State," where Conor voice feels the most exposed.

By no means is Motion Sickness a "best of" disc. He updates (both musically and titularlly) "A Scale, A Mirror And Those Indifferent Clocks" from Fevers & Mirrors to simply "Scale," to mixed results. The iTunes freebie "When the President Talks to God" is the protest song for our generation that few people have ever heard; it wraps up the whole problem with the Dubya presidency in one neat little package (and man, you can tell Conor believes it, as his voice sounds like he's ready to pick a fight himself), but lacks the texture and depth that most Bright Eyes songs contain.

Not all of the songs on Motion Sickness work as well as "Landlocked Blues" or "Make War." His cover of Feist's "Mushaboom" lacks the playfulness that makes the original such a gem, although it is an admirable attempt to cheer us up. Some of the more bombastic songs (well, on the Bright Eyes scale) such as "Method Acting" or "Old Soul Song" seem to overpower Conor's vocals. However, the album finishes with a combination that seems so logical: Conor's voice and Elliot Smith's lyrics. "The Biggest Lie" leaves us all wanting to give Conor a hug and tell him that it will be okay. Unlike the cover of Feist, "The Biggest Lie" feels very natural and organic for Bright Eyes.

Motion Sickness is not apt to convert any non-Bright Eyes types into the Conor fold. However, for those of us who are enraptured by Conor, when you can feel the quiver in his voice in your headphones, it's as close to being there as you can get without, well, being there. Unlike many vanity "live" albums that come out that just fill out a record contract or add to Christmas sales, Motion Sickness adds to the Bright Eyes oeuvre rather than feeling like a throw-away disc. If anything, Motion Sickness further cements Bright Eyes/Conor Oberst as one of the most important musicians of the decade.