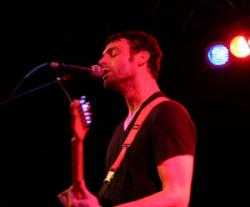 The talents of the Votolato family are well known to most Seattle music fans. Friday night's sold out show with Slender Means (featuring Sonny Votolato on guitar) and Rocky Votolato further proved that fact. The crowd from Neumo's box office stretched out to Pike Street, as fans waited, hoping people at will call would no-show so they could squeeze their way in. As soon as I walked in the door and headed upstairs, I got caught in a dual set of bar lines fifteen people deep.

Even Slender Means' sound check was filled with anticipation. The floor was filled to the brim with kids literally jumping and hollering, as the drinkers upstairs stood more solemnly but nonetheless crowding the balcony past a point where one could budge. This show was about "family" in more ways than just the fact that Sonny and Rocky are brothers; Slender Means members Sonny, bassist Paul Pugliese, and drummer Eric Wennberg were also Rocky's backing band as they toured together down to South by Southwest. Votolato mom Tina stood in the front row, with the same contagious laughter as her talented offspring.

The band opened up with "Fade Out," the first track off their new EP, Rock & Roll Machine. Wennberg told Neumo's resident sound guru, Scotty, as they were setting up that they wanted it turned up loud — and from the very first note, we got it loud. Slender Means didn't feel like the same gentle pop band with just hints of darkness and malcontent in their lyrics; they played with rich, loud, soulful emphasis.

As they played, they never let on how sweltering hot the room became. They sounded like a band home from tour, reflective, and well-worn — and most certainly incredibly practiced. Josh Dawson's resonant voice has a quality that sticks with you, leaving you pondering his words well after you've left a venue or turned off your stereo.

The last time I had the chance to see Rocky Votolato was three months ago, playing solo, sounding gorgeously alone and haunted. He's transformed with a backing band; the contrast in the sound shows what a dynamic performer he is. "White Daisy Passing" goes from a solemn remembrance to a powerfully pop-sounding song. Rocky played multiple new songs off his upcoming June 19th Barsuk release, and whet the crowd's appetite with mention of a CD release show June 25th at the Triple Door.

The new songs have the same feeling of whiskey-infused goodness that sound a thousand miles away from a chilly Seattle night. But the crowd was most in love with the chance to sing along with the back catalog, almost louder at times than Rocky himself when the rest of the band stepped offstage. By the end of the night, the entire event felt less like a show and more like a welcome home party for the road-weary travelers.

Of course, the evening itself was in celebration of Slender Means' newest release. While it might not be quite the fix you were looking for post-Neon & Ruin, the Rock & Roll Machine EP has that special b-side quality; it can help tide fans over until their next big endeavor. My fingers are crossed that it won't be too long.

There will be a second EP celebration at Easy Street's new "After Hours" venue in their West Seattle store on May 4th; rumor has it, their unannounced special guests are not to be missed as well.