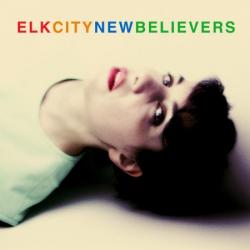 Elk City's moody, dreamy pop sensibility makes for a serene and fulfilling listening experience. Though the songs on New Believers have structure, the band takes risks and lives outside of the box, resulting in an album that is respectable, genuine, and exquisite.

The booming, melodramatic songs sound like the soundtrack to a love-drunk evening spent in a dark, smoke-filled lounge, martini in hand. "Cherries In the Snow," the opener, seems poised to be a "single" — it's on the band's MySpace player, it's the free download available through Insound, and it's even set to appear on an upcoming TIG AstroPop Podcast — but somehow it's a strange choice to represent this album. It's a striking, PJ Harvey-flavored song, but it's more aggressive and less romantic than the majority of the album, so don't let it be your only impression of New Believers. As the album moves on it introduces more fluid, lovely melodies with subtle but effective instrumentation.

Singer and songwriter Renée LoBue has a captivating voice that's both soothing and alluring. Her soft vocal deliveries make for an effortlessly organic sound. At times it calls to mind the White Stripes songs on which Meg sings — stark and honest — though with more soul. It's also not surprising that Elk City member Sean Eden was formerly with Luna, as Elk City's sound has a similar dreamy quality.

One of the strongest moments comes in the transition between track six, "Totally Free," and track seven, "You Got Me." The former is a sultry semi-ballad with LoBue's vocals echoing while male harmonies back her up on the title words. The song ultimately erupts in feedback-y guitars before dropping off. "You Got Me" is an up-tempo piano-led throwback to early-'60s girl pop. As the first segways into the second, they are the ultimate contrast and yet they complement each other lavishly. In fact, Elk City's songs are all stylistically unique.

"Silver Lawyers," "My Type of Criminal," and "Nighttime" are the slower numbers on the album, each lovely and serene. The recording has an airy or spacious quality to it, a la Radiohead. Band member Ray Ketchem produced, recorded, and mixed the album, and he clearly understood LoBue's vision for these songs, creating exactly the right mix and allowing them their breathing room. "Cherries in the Snow" and "White Walls" are more rock 'n' roll, with lots of electric guitar. LoBue sounds a bit like Debbie Harry, especially the more recent, matured version. The remaining songs fall somewhere in between, always delivering on Elk City's promise to keep things sonically interesting. Also contributing heavily to the stunning sound is the instrument choices — pedal steel, dobro, and Hammond organ all appear, adding subtle nuances.

All in all, New Believers is a solid and compelling album that will stay in heavy rotation on my iPod.