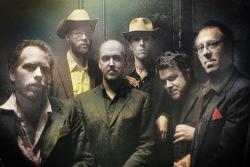 There was a moment at T.T. The Bear's on this Friday night, at some point during the second band, when I wandered back toward the pool tables and saw Munly sitting by the merch table, staring intently at the Stanley Cup Finals on the house flat-screen TV. Like, really focused, clapping to himself.

I turned away immediately. How could I allow the illusion to be ruined like that?

Munly, for all intents and purposes, is one of the creepier characters in music right now. Like a born-and-crossbred Deliverance orphan with a liberal arts degree, Munly struts around on the stage during an Auto Club show with a clenched aggression and gnarled, backwoods humility that seems to come straight out of some imagined Faulkner or Steinbeck locale. It's hard to reconcile that with someone paying close, sober attention to any kind of modern sports broadcast. His skin's stretched across his sharp, jagged skull like a cracked leather glove, his eyes poke out from deep within a couple of soot-dark sockets and he sings with a gritty drawl that snarls with a crooked machismo more at home at a seedy leather bar than at ESPN. It's an amazing facade and it's one I wasn't really keen on looking past that night.

Slim Cessna's Auto Club is a kind of punk-country Americana experience that, for its ten-year history (excluding a few years before the sort of reboot around 1998), stakes its reputation on a precarious mix of facade and honesty, of charm and creep-out factor. On stage, it's literally the balance between its two lead singers – Munly's Baptist psychopath and official front man Cessna's gold-toothed and down-home Red State caricature.

Friday had all the messy luggage that the band has been trailing along for the last several years, but things seemed a bit more streamlined, almost more professional. Three albums into this group's career (they seemed to have called a mulligan on their debut album), they appear to have settled on a core of hits like “Goddamn Blue Yodel #7,” “Last Song About Satan” and “Cranston.” But the songs from the group's latest album, Cipher, were the real foundation here.

Though it may be presumptuous, I'd feel comfortable saying that the Auto Club's songwriting has taken a more Munly-centric turn with this batch. The stuff on Cipher echoes a lot of the droning, moody stuff from his last solo album and delves way deeper into the defiant, blaspheming hillfolk lore that seem to be more his bag. Consider Cessna's last side project: the tongue-in-cheek Jerry Lee Lewis-style country combo Blackstone Valley Sinners with Rich Gilbert, his wife on bass, and a drum machine. They covered “Rainbows Are Back In Style.” Is this guy really responsible for songs about Jesus rising out of the ocean like the Kraken and stomping across the country to eat the state of Colorado for dinner?

Whatever's going on behind the scenes, the creatively hellbound feedback loop this band has been in is getting louder and stronger every year. The pissy underling who's fed up with authority has taken root in nearly every song and narrative in the band's oeuvre at this point. Slim's accent and “aw-shucks” temperament not only sounds like George W., it makes a great stand-in in all these slightly removed allegories about power and neglect.

Slim played it up to great effect as he and Munly spent the set Friday role-playing against each other as sailors, preachers, government thugs, prodigal father-figures, slack-jawed murderers, cross-dressing minstrels, and country trash. They jab fingers into chests, hold hands and kneel down to one another. Mics served double duty as stage props — guitarist Dwight Pentacost and slide guitarist John Rumly's backup mics were often grabbed and used as mock daggers, syringes and phalluses. There's been a lot of talk of the “cabaret scene” in the last few years of gypsy punk and Weimar/circus posing, but none come as close to the natural flow, stage presence and originality of the Auto Club's shows while still maintaining such an informal and unpretentious feel. It's like somebody gave Cormac McCarthy (another depressive Americana institution with deep ties to Providence) some laughing gas and put him in charge of a night at the Grand Ole Opry.

The band opened with the Big Brother pledge of allegiance “Americadio” and burned through the next twenty minutes with one-two punches like “Pine Box” and “32 Mouths Gone Dry.” By the time they finally stopped for a breath, half the mic stands on stage had been broken in two. The electric bass had broken and Shane Trost permanently settled onto the upright. Sitting on the edge of the stage with his head between his knees, Munly began the opening monologue to the Nick Cave zombie-Christ revival “Jesus Is In My Body,” his first starring role of the night. It's a chilling, two-minute Jonathan Edwards-style prophesy over a droning guitar and foggy bass line, maddeningly overacted like Dennis Hopper in Apocalypse Now or Tom Waits' Renfield in Bram Stoker's Dracula. Later in the set, Munly took a break mid-song to look up to Jesus with two crooked middle fingers: “You see, sir, very time Slim and I have sinned, we've had to take account,” he said. “You said you'd come back down to us but you never did come back. That's a lie, and a lie is a sin.” He spit it over the crowd with defiant glee — it's campy and hokey and highly dependent on a healthy suspension of disbelief, but it's a chilling moment for anyone on board. The audience chimed right in with tribal claps as the sauntering Sunday drive worship session of “Everyone Is Guilty” devolved into an underworld bonfire ritual with unnamed saviors and leaders burning in effigy, the band singing along, “Maybe it's time to take account….”

The band really has never sounded better and seems back in Denver fighting form after years as a loose, nationwide contingent with members in Boston, Providence, Pittsburgh and Colorado. The long trip that it's been has kind of taken on a creative, mythical life of its own. With every member's move, the proper nouns in the songs have changed — the last album centered around the Narragansett tribe and towns like Cranston, Pawtucket, Knightsville, all cullled from Cessna's then-home of Providence, Rhode Island. The focus is always on local and personal microcosms, and in the hands of Munly and Slim, the whole thing has become a bent framework on which to hang all kinds of ideas.

By the time the show was climaxing with with Cipher's closer, “That Fierce Cow is Common Sense In a Country Dress,” the whole thing had blown up to include the crowd, the city and country. Cessna looks down on Munly and says, “This one here's learned how to do both at the same time — breathe and think.” After years of staring inward to examine the deep, dark ditches in the country hills, the band seems to be spending more time looking up and out at what this all means for the rest of the land, and how even their older gloom and doom material still applies. “This last song is called 'Hold My Head,'” said Cessna, introducing Always Say Please and Thank You's epic Old Testament fight-or-flight redemption hymn. “Pay attention, it's a fitting song for these times we're in.”