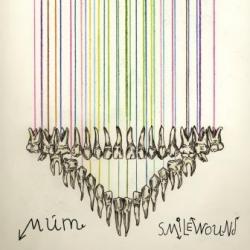 If it’s the frozen, outer space soundscapes of Sigur Rós that floats your soul, it can seem like your only hope is a genre of one. But as Yoda said, “No, there is another.” Also hailing from Iceland, also active since the late ‘90s, and equally bizarre, múm use electronics embellished by ethereal, child-like vocals that make Jónsi’s falsetto sound like a baritone to provide the same experimental, atmospheric trip. Of course, most fans of Sigur Rós are probably already familiar with múm. But in case you’ve somehow missed them, former member Ólöf Arnalds did a very nice history/interview in the Grapevine.

With their new album, Smilewound, múm present a slightly more accessible side of themselves. Like Sigur Rós’ Takk, Smilewound could introduce the band to a wider audience, but it might lose a few older fans. The track “When Girls Collide” is as bright and energetic as something Grimes might produce. Bonus track “Whistle” actually features Kylie Minogue. About half the album, including the laptronic “Candlestick,” and especially “Colorful Stabwound,” with its heavy drums and funky basslines, has a clubbier sound, as if múm have been listening to Retro Stefson lately. That’s not to say it’s an overwhelming change in sound – it’s more like the difference between the xx’s first and second albums. But danceable beats mark a shift in múm’s discography. There is still plenty of classic múm to love, though. “Underwater Snow” is as trippy as its title suggests, with vocals so high they dissolve into vapor. “Eternity is the Wait Between Breaths” is also just what you expect from múm, with its eccentric sound effects and prominent use of the triangle.

“Scream and Shout” is a lullaby exhorting listeners to riot. Landing somewhere between CocoRosie and Mary Poppins, this song somehow seems to encapsulate what múm is doing on Smilewound far better than any rational description could.

Smilewound will be released on September 17 in the U.S., but it’s available for pre-order from Amazon now. You can listen to it first here.