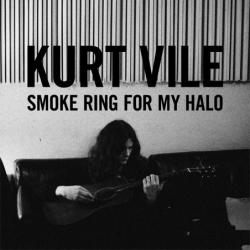 Smoke Ring For My Halo

{Kurt Vile is going to be playing the Capitol Hill Block Party on Friday, July 22, starting at 5pm on the Main Stage.}

Kurt Vile has an occasionally insouciant vocal presence, yet a luscious guitar tone. “Baby’s Arms,” the new single, is as much a raspberry blown at the world as a lustful kiss splattered on the cheek of his sweetheart. “I get sick of just about everyone / so I hide in my baby’s arms.” That’s how this timelessly rebellious dichotomy is presented on his new, fourth full length Smoke Ring For My Halo.

Vile only kind of means being mean. He likes to sing about “a whole lot of dirt” (a mocking, baiting masterwork called “Runner Ups”), yet was raised in a genteel bluegrass, Jesus-loving household. According to rumor, he tried to bring the banjo of his youth back on this album, but maybe those got left in the outtakes (next time?). This has injected his songs with a transcendently shimmering, out of time feel, in which lyrics despairing (“I’m already gone” from “Jesus Fever”), flinching to fight (“On Tour,” in which he compares being on the road to Lord Of The Flies, eek), and pervert-playful (“Peeping Tom”) won’t be heard at first. Instead, one marvels and is moved by all the picking, strumming, and shivering layers of acoustic and electric guitaring.

Vile is on tour with Thurston Moore (!), having thrilled live audiences at All Tomorrow’s Parties back in May and just recently at the 2011 Pitchfork Festival, and each time he plays his Violators blow mellow audiences to the back — and then bring them forward for a mid-gig stripped down set-within-a-set. He’s a record-loving kid from Philadelphia that insists he isn’t a “record nerd” but his music betrays this dismissal. He is already almost as vocally soulful as a teen Mark Lanegan and proficient like a middle-aged Richard Thompson or Lindsay Buckingham. He is a cocky little shit and I love hearing him complain about everything but his baby’s arms, and I wouldn’t miss an opportunity to hear him play music that song fiends delight in as much as ambient hounds. That — and the sort of laid back, not afraid to be sarcastic Smoke Rings — sounds like a legend in the making.