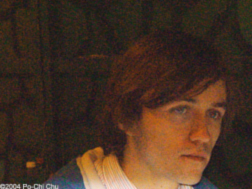 He “crafts un-Britney pop, but can still rock to Justin,” according to the always-reliable MTV. Typical for a mainstream American media entity that has trouble figuring out what to make of non-cookiecutter artists like Norwegian pop sensation Sondre Lerche; I doubt they’ll ever really ‘get’ him, and maybe that’s not such a bad thing. With a successful 100-date tour, appearances on the late-night chat shows, and multiple writeups in the likes of EW as 2004 benchmarks, he’s not exactly a well-kept secret anymore.

All I know is that his music is utterly gorgeous; his charisma, infectious. What’s impressed me most about his recent live performances, apart from his obvious cute likeability factor, is the sheer level of control he displays on stage — remarkable for such a youthful, amiable performer. Then there are the recorded works: his latest effort, a lush and shimmering album called Two Way Monologue, is one of my favorites of 2004.

With fabulous igLiz and adorable imaginary-boy photographer Po-Chi Chu in tow, I caught up with Mr. Lerche the day of his Thanksgiving-weekend Crocodile performance for a spirited chat about Ashlee Simpson, the year in cinema, and the many vices of Fleetwood Mac.

In preparing for this interview, I read over some of the tour ‘monologues’ you post regularly to your website, and I discovered some rather surprising things: you’re very into late-’80s Fleetwood Mac right now…

… and you’re not afraid to spew hatred for Ashlee Simpson.

Care to elaborate on any or all?

{laughs} Oh, well yeah! I basically just use the site to promote whatever’s going on in my head. For me, music’s a really big thing, so when I go crazy about a record, or a theme, or a group or whatever, I want to spread the word. So I rattle on about that. Right now I’m crazy about this record from the ’80s by Fleetwood Mac, and thoughts just appear… usually I just try to be funny! {igLiz laughs} The thing about Ashlee Simpson was taken as a kind of serious attempt to ridicule her, which I think she does a perfectly fine job of herself. I don’t think she needs me to help her do that.

Sometimes you just get sick and tired of all the music you are surrounded by without being asked your permission. Basically what I was saying, the point that was not taken in that thing, was how much better I thought mainstream pop music was in 1987 as opposed to the current era, which has, well, Ashlee Simpson. And also how much cooler Fleetwood Mac was in 1987 is than most indie bands that I hear nowadays. Basically that was my point, which is a point that I guess was missing… well, went missing in my “hatred of Ashlee Simpson”. {embracey laughs} Basically what I’m saying is that I like Jessica Simpson much better.

I’m pleased as punch that you think Phoenix‘s Alphabetical is one of the best new records this year.

I love it too, and I agree that “If It’s Not With You” is one of the better tracks.

Yeah! Absolutely. I’ve read so many reviews that say it loses its excitement at the end of the record. The more obvious pop singles are at the beginning but I think the more interesting songs, like that one, are at the end.

What other new music are you into now?

New bands? Hmm, well I like this guy Raphael Saadiq right now. He just came out with his second solo record, he does R&B, programming and organic-type musicianship. It’s a lot of fun, he’s a great producer who I just enjoy a lot.

{igLiz}
Where do you find out about new music? Just on the road, word of mouth?

Yeah, well I read a lot of magazines and I have a lot of friends that, you know, we share music all the time. I’m very curious and I try to be on top of it.

2004 has been an amazing tour year for you. There are nearly 100 dates listed on your website: Norway from February through April; North America (including Seattle) in May; Norway, Denmark, and the UK over the summer; North America again beginning in September and continuing until December. How do you do it?

{laughs} Well I don’t know! It’s been kinda wild this year, so I must admit that I’m really looking forward to finishing off this tour and going home to take some time off and basically just start being creative again. All this touring just takes up so much of your time that you really have to stop writing songs, because it’s just not really happening when you’re traveling as much as I have. So, I’m really looking forward to getting back into that and making a new record, and starting off fresh again.

It’s kinda strange, because you’re traveling and you’re playing like, actively for two hours a night. The rest of the day just goes to waste, you know, the driving and the watching the last states pass, and obviously if you were home you could do a lot of sensible things. On the road, you know, you read books and magazines and you watch DVDs, and that’s a lot of fun, but after a while of that, you know, you feel like you should be doing something more with your time. And that’s what I’m looking forward to doing.

Speaking of DVDs and the like, what are some of your favorite films of 2004?

Well my favorite, like, new films — I love going to the cinema, so I try do that as often as I can when I’m touring — I love Eternal Sunshine of the Spotless Mind.

And I like Spiderman 2 — I LOVE that film. And I love {giggles guiltily} The Day After Tomorrow…

Yeah, that’s one of my favorites as well. {Giggles again. IgLiz giggles too.} Yeah, and I Heart Huckabees I thought was very enjoyable. And um, what more? Those are my four favorites.

Back to the tour dates, I notice that you’re scheduled to play the Nobel Peace Prize concert December 11 in Oslo. How did that come about?

Well they have a couple of Norwegian acts every year, in addition to all the international ones. And they have some big ma
instream acts there every year. So I’m very flattered that they asked me to be one of the only Norwegian acts this year, and, you know, I’m young and I’m kinda left of what you may usually consider mainstream, possibly, so I’m very flattered to get to be in that company. And it’s a big production and I get to perform with a full orchestra and my band. So I’m very happy about that. Hopefully I’ll get to meet Oprah Winfrey!

Oh, is she gonna be there?

That’d be an interesting green room to be in.

{Laughs} Oh absolutely! Well, I’m sure they separate! {everyone laughs}

{Read Sondre’s account of the evening here. No mention of Oprah, but it seems that he did get to hang out with Tom, plus Patti LaBelle, Joss Stone, Cyndi Lauper, and Tony Bennett.}

The current US leg of your tour has taken you places I’m sure you’d never been before. What were some of your favorite cities to play?

Just if anything stood out. No pressure!

Of the places that I haven’t been before, I guess, hmm…

I’m sure every day you’re like, ‘Where am I again?’

Yeah, well you know this last leg of the tour I know very well. When you play in the Midwest, well, it’s always very different. Like one day you play, say New York, and then you drive half a day and play Little Rock, Arkansas… you feel you’re on a different planet. And that kind of diversity, that kind of sudden contrast is really, you know, very typical, I think, about what we do.

Arkansas is actually my home state…

… so it makes me wonder: how did you find Little Rock?

Oh, actually I’d been there once before. I played there in my first show with Nada Surf! [Vino’s is] a nice venue. And the good thing about those places is that they have all-ages shows. So there’s a lot of kids coming. Well, my age and slightly younger. {igLiz laughs} When I toured like three years ago, my first tour, I played a lot of places where I really wasn’t allowed to be in a club if I wasn’t playing.

Speaking of beverages, our interviews here at TIG tend to be a bit coffee-centric. “Coffee with a Rockstar,” we call it.

Are you a slave to the bean?

I don’t have many of those, like, vices. I don’t drink coffee, and I’m not a big drink person in general. If I go somewhere I don’t have to drink, I can just sit still. I like a glass of water or a soda or maybe an occasional mojito. Usually I just wouldn’t drink if left to my own devices, though. And I don’t smoke. But I do have other vices.

Which may be healthier. {igLiz laughs}

Well, you never know – they were big on coke!

They had enough vices for all of us. I’ve seen the Behind the Music!

They did have issues!

Well, I don’t want to hog you – I know you have another interviewer waiting.

Oh, I have a TIG t-shirt for you to remember us by, and to thank you for the interview. And now at least you know you’ll have some clean laundry on the road.

It was great to chat with you.

Yes it was! Have a great show tonight.

Thanks so much – this was fun!