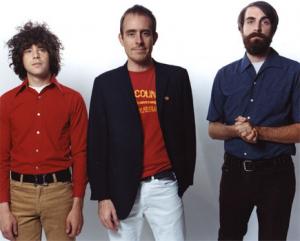 Ted Leo went through a lot to make it to Seattle. His van and amp broke in Austin. He drove through a tornado on the way to El Paso. He braved a freak snowstorm in the desert of West Texas. His guitar broke just before his Seattle in-store at Tower Records. Reflecting on the past week, Leo remarked "it's just every day. It's so insane." But despite the mounting and often bizarre obstacles, he arrived in the Northwest exactly one week after Election Day.

November 9, 2004 was a fitting day for a Ted Leo show. Seven days after Black Tuesday, the shell-shocked look worn on so many faces in Seattle had started to fade, only to be replaced by a pallor of frustration and hesitancy about what to do next. For some, Leo's show provided a way for people to respond to the emotional rollercoaster of the previous week. "People don't come to see us just to rock out," Leo remarked as we sat down between a hectic in-store set and his well-attended show at Neumo's. "There's a real sense of community and energy in the crowds at our shows these days. It's been a really interesting, cool thing to see develop, especially over the past year or so."

Out on tour to support his newest record Shake the Sheets, Leo spends evenings performing songs that hold particular significance in light of the current political climate in the blue states. "The funny thing is, I wrote it last spring," mused Leo, "and in retrospect – and obviously it's only been the last couple days that I realized this – it's a record for November 3rd." Leo sees his latest release as unlike "the rallying cry that Hearts of Oak was…getting fired up and whatnot." Shake The Sheets summons "a different kind of rally, a more personal rally." It's about "screwing yourself back up to live through it."

The widely enthusiastic response to Shake The Sheets signals that others have taken this new rallying cry to heart. "It's incredibly gratifying, knowing that it's being accepted and largely praised." In Leo's mind, the best part of this recent acclaim stems from knowing "that it's just because of what it is and what we've done." This sincerity rings through in his live performance as well. "Playing live, performing well, is of paramount importance. Every song has a lot of points…what is performed is what carries these ideas. If it's done well, hopefully people will receive it all."

Which is not to say that Ted Leo views music as a way to proselytize. "Even though I do recognize what it all means to audience members at this point in time," Leo noted, "it's very rare that I actually am like 'I have this point and I want to get it across.' There are points in there that I think I would be happy for people to take away. But I do write songs. It's not a polemic." This attitude allows Leo to create music that appreciates his audience's ability to think for themselves. "I know how much art and music in particular has done for me in terms of keeping momentum, that energy behind my own thoughts and idealism and efforts. And I've finally come to understand that I seem to be in that position for some people right now. It's a great place to be."