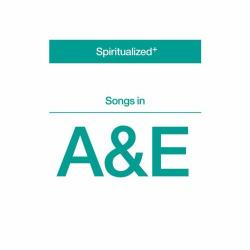 There is a feeling of redemption stitched throughout the new studio album by Spiritualized, and it is no wonder since songwriter Jason Pierce almost died from respiratory failure in 2005. He spent an extended period in the accident and emergency (A&E) ward at the Royal London Hospital and the traumatic experience is poignantly captured in this recording.

Many of the songs were actually written before Pierce fell ill. The album was reportedly almost scrapped until Pierce was encouraged by film director Harmony Korine to finish the record. As one would expect, the results are harrowing and even desperate at times, but there is also a certain amount of relief in the delivery where it is obvious that Jason Pierce is truly grateful that he survived the intense experience.

As is often the case, what doesn’t kill can strengthen. The songs in this collection are marvelous too. There are abrasive rock tracks such as “You Lie You Cheat” and “I Got a Fire” that sit comfortably next to melancholy lullabies like “The Waves Crash In” and “Don’t Hold Me Close.” In the case of the first mention above, a prominent Stooges influence is carried over from Spiritualized’s last album, 2003’s wonderful Amazing Grace. As if in celebration of their career, all of the elements of Spiritualized's catalog are present: melody, dissonance, strings, drugs and raw energy.

If there is one standout song in this collection it is probably “Death Take Your Fiddle,” which opens with the sound of someone breathing through a respirator. As the rasp of failing lungs goes in and out, Pierce sings the lines “I think I’ll drink myself into a coma/I’ll take every pill that I can find/But morphine, codeine, whiskey, they won’t alter/The way I feel now death is not around,” as though he is still lying on the hospital bed. Six instrumental harmony tracks are interspersed throughout the record that add ambience between the featured moods in the songs.

Songs in A&E finds Spiritualized fully recovered and thoroughly rejuvenated. There is enough variation in the songwriting to make the music diverse and interesting, but the tracks are consistently great as well. Both the die-hards and the uninitiated should find the subject matter to be touching, and the songs presented in this collection are among the group’s best.