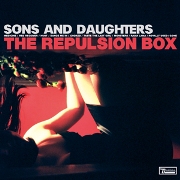 Sons And Daughters are a four-piece Scottish folk/rock troupe formed by former Arab Strap backing vocalist Adele Bethel and drummer David Gow. In 2004 they put out a seven-track, 25-minute mini-album Love The Cup to critical acclaim. With The Repulsion Box they now deliver their first full-length album, on Domino Records, which makes them label-mates of the perhaps just a wee tad over-hyped and fellow Scots, Franz Ferdinand.

On The Repulsion Box, S&D have further refined their version of 'less is more' stripped down indie folk-rock into a concentrated and intoxicating brew and come up with a real gem of an album. While being not much longer than it's predecessor at less than 32 mins in total, it comes across as much more substantial, wiser and — well — vitriolic. S&D's often acoustic and bare bones music, with its relentless yet hypnotic military martial beats, is topped off with Adele's positively passionate and often caustic vocal delivery, lyrics and unashamed Scottish brogue. It's these powerful vocals by Adele that carry The Repulsion Box, raising it from being merely highly entertaining to downright compulsive.

Musically, S&D's brand of indie folk reinterpretation seems reminiscent of early Violent Femmes and 16 Horsepower (had they gone electric) but with the rhythm section from New Model Army. There's also and an unmistakable infusion of contemporary Scottish rock influences from the likes of Franz Ferdinand, only this time with a welcome edge. There are also occasional Nick Cave overtones, which are perhaps to be expected since the album was produced by Victor Van Vugt, who has also produced Beth Orton, Mercury Rev, and of course Nick Cave, among others.

The Repulsion Box opens with "Medicine", a track that rudely introduces you to the concept of having your skull bashed in with a lead-lined haggis by way of the relentless military beats S&D employ throughout the album. Without pause, we are then launched into the folksy and acoustic "Red Receiver", a track very reminiscent of early Violent Femmes. However, despite their musical delivery and often bleak lyrics, several tracks on The Repulsion Box are in fact quite catchy and danceable, including "Dance Me In", "Taste the last girl" and "Monsters". Indeed, as guitarist and co-vocalist Scott Paterson has said of S&D, "There is a very dark side to our music… but at the same time, it's music that you can dance to. At gigs, there's nothing worse than seeing people just standing around…" .

To wit, "Dance Me In" is a hypnotic, coarse guitar riff-driven beast that quickly sucks you in and should make even the most kinetically-challenged want to get up and bop to the beat. "Taste the Last Girl," on the other hand, is a good ol' 60s-style rock song, and with it's "na-na-na-na" vocal lines to boot. Other tracks include "Choked", where S&D's Franz Ferdinand influences are at their most apparent, and "Rama Lama", the 'epic' number of the collection at over five mins, which best shows off their reductionist approach to musical arrangement.

The highlight of The Repulsion Box, however, is the irresistible "Monsters", where S&D's fast-paced martial beats drive the music relentlessly forward, while Adele's lyrics and delivery are at their acerbic best as she and Scott spit barbs at each other as if the most jaded lovers:

(Him) "Monogamy to you seems just black and blue
All the best psychotic lovers ain't got nothing on you".

Finally, The Repulsion Box perhaps fittingly wraps with "Gone", which opens with a tantalizing rock guitar riff that makes you half expect S&D to do what they've avoided up to then and explode into total a total rock out. However, in keeping with their 'less is more' musical approach, it instead slowly shrinks away to just rhythm and isolated notes — and just like that, Sons And Daughters and The Repulsion Box are gone…