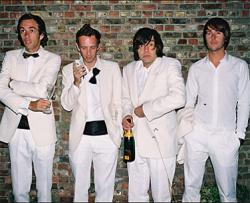 A few months back a friend of mine handed me a pink CD with a bunch of optical illusions incorporated into the album artwork. It was Soulwax’s, Nite Versions and I couldn’t get it out of my CD player for weeks. When the same friend told me they were playing at Chop Suey on April 25th as part of their Radio Soulwax tour, I immediately got tickets and tried to figure out how I was going to manage to get to work on time the morning after the show.

I really had no idea what to expect out of this show. I knew the concept behind Nite Versions was to have a set that could be performed live, as opposed to a DJ set; Soulwax wanted to be a band, not just spin records. I envisioned a handful of guys crowded around laptops pushing buttons with maybe one guy playing drums. Nite Versions is an electronic record with big house beats, bleeps, blips and even talk of Ecstasy. A lot of songs on the record could easily be spun at a rave in Miami or at a club in Ibiza; truly performing it live could go either way.

We got to Chop Suey around 10:00pm and they had thoughtfully posted the schedule of performers and Soulwax was to hit the stage at 11:30. With an hour and a half to go before show time I left for a drink (I love re-entry) and then came back just in time to catch the last song by Muscles, the chorus of which was “Muscles I love you, I want to have your baby.” It was as ridiculous as it sounds.

11:30pm came and went and Soulwax were nowhere to be seen. The house DJ’s did a good job of keeping the crowd rolling by spinning up tempo tracks one after another; Daft Punk, Motor, and Prodigy got the house dancing and ready for Soulwax when they finally hit the stage at about 20 minutes after midnight, all four members dressed in white from head to toe.

They were indeed a full band, no laptops could be seen. They had a samplers and synthesizers of course, but they also had a guitarist, a full drum kit, and even a glockenspiel. They explained their tardiness; apparently there had been some issue at the airport. The Soulwax website states that: “Radio Soulwax nights are about putting Nite Versions into the right environment-where they can play after midnight, to an audience that will dance.” This fact, along with the huge tour bus that had been parked outside of Chop Suey before I got to the venue, made me question this supposed incident at the airport. In any case, they went on after midnight and people were definitely dancing.

They opened with “Teachers” and were on their way. By the third song of the night, a blistering rendition of “E Talking,” lead singer David Dewaele’s white shirt was soaked through in sweat and layers of clothing were being feverishly removed by members of the crowd as they danced. The party went on as Soulwax ran through tracks from Nite Versions, gaining momentum as they went. They closed their set with a vengeance, blowing out “Another Excuse” and leaving the stage at 1:30 in the morning. (I didn’t quite make it to work on time, but I tried, I really tried.)