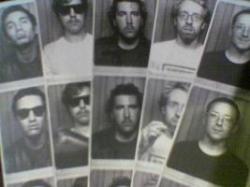 I became a Hot Chip fan in the summer of 2006 when I heard “Colours” (yes there is a “u,” they’re from London) and fell completely under its synth-drenched spell. Since then, “Over and Over” has been a staple of indie clubs and late-night bedroom dance parties since the band’s second album, The Warning, was released a year ago.

When I saw them at LA’s Troubadour this past August, it was one of the most electrifying sets I’d ever seen. So, I was surprised when their recent set at Webster Hall was repetitive and a little bland, with the exception of a few really great moments. To be fair, I blame that partially on the size of the venue and the fact that New York crowds usually go 50/50 on audience participation – half the crowd will dance to their heart’s content, the other half will stand there like zombies.

The most striking thing about a Hot Chip show is that there's no drummer, only one guitar, and four synthesizers on stage at once. As the shortest member of the band, frontman Alexis Taylor has the Thom Yorke syndrome which had him stand to the far right and sing with huge power in his unique, almost angelic vocals. The rest of the band stood in a straight line across the stage, beginning the set with the calming sound of synthesizers just waking up, which soon grew into a behemoth wall of sound when guitarist/synth player Al Doyle began pounding out 4 repeated notes on his Roland.

Each song in the hour-long set lasted no less than five minutes each, and it actually became more fun to watch Doyle dance perfectly in sync like a robot with synth player Owen Clarke and drum machine operator Felix Martin to his right, and synth/backing vocalist Joe Goddard to his left. Two of the evening’s highlights were “And I Was A Boy From School” and a cover of New Order’s “Temptation.”

The friend that I’d brought to the show (her first Hot Chip show ever) commented to me about halfway through the set that it was like being at a German nightclub. That comment alone encapsulates the entire problem: the music was better heard than seen. There could have been a DJ on stage playing all of the music the band was playing and it would’ve gotten the same reaction from the audience.

I got the feeling that there were people there who knew other songs besides “Over and Over,” but it was still the proverbial elephant in the room for the entire set. The crowd exploded into a fury and the floor started shaking as the stoned masses (it was Friday, 4/20, after all) jumped around and pumped their fists, screaming the chorus in unison. It was like the end of the world, and we’d all die dancing together.