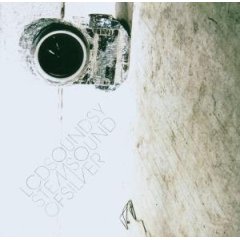 I normally attempt not to be hyperbolic with my reviews, but if you buy one album in this, let's say, decade, LCD Soundsystem's Sound of Silver would be a profoundly wise choice.

James Murphy has constructed an album that not only embraces but transcends the genres it flits between, from trance to down-right balladry. LCD Soundsystem has refined their (his?) song-making technique, and also shown that Murphy can hold his own as a singer, something most post-electronic digit tweakers can't claim. Sound of Silver is evidence that rock music has a future, even if it doesn't know that this is its future.

An excellent departure for looking at Sound of Silver might be a quick look back at the first, self-titled LCD Soundsystem album. That album is worth its coin merely by collecting some of the early LCD Soundsystem singles such as “Losing My Edge” and “Yr City's a Sucker” on a bonus disc, but the true album itself is chock full o' musical gems like “Daft Punk is Playing at My House” and 'Tribulations," landing the debut at #3 on my best of 2005 list.

Sound of Silver expands LCD beyond the dance-oriented, DFA sound to become something more universal. Sure, the opening minute of “Get Innocuous!” is a very conscience shout-out to “Losing My Edge,” but instead of being purely dance music, it veers into a world of post-disco magic, evoking both New Order and “Fame”-era Bowie simultaneously. Although “Time to Get Away” might be the least interesting song on Sound of Silver, it shows the dynamic growth in Murphy's song-smithing (by the way, LCD trivia: Murphy passed up a chance to be a writer on Seinfeld. Go figure), taking a page out of the fellow DFA alumnus, the Rapture, showing that LCD Soundsystem can make pure dance-rock with the best of them. Now, if you're looking for Sound of Silver's “Daft Punk is Playing at My House," then look no further than “North American Scum” — it's raucous and infectious. Whether it's an indictment or ode to North Americans is immaterial to the post-punk Le Tigre electroclash sound. If we ever needed another “Loser”-type song to take the nation by storm this summer, this could be it.

This first third of the album is the most dicey portion you'll hear, but only because what you're up against next is breathtaking. “Someone Great” is pure ecstasy – it's hard to describe all the bits and pieces spliced into this marvel. It's part Postal Service, part Orbital, part Depeche Mode, part undefinable. It has such a gentle tone without sounding too soft and fragile; it practically melts in your ears (OK, maybe tha'ts an odd description, but listen and you'll know what I mean). The song itself might be about a breakup, but does that matter? It's a bittersweet anthem that just re-inforces the refined nature of Sound of Silver and the idea that Murphy isn't just a studio genius but a helluva a songwriter.

“All My Friends” only suffers from being directly after a moment of bliss like “Someone Great," but the banging piano opens and morphs into a mid-80's alternative rock homage with bits of Echo & the Bunnymen, U2, and Joy Division all at once (Murphy even has an uncanny bit of Bono is his voice). “Us V. Them” is much more like what you might expect from LCD Soundsystem, building itself up into a frenzy like “Losing My Edge," while “Watch the Tapes” is downright punk set to a sequencer. The title track of Sound of Silver is an anthem for middle age as Murphy drones, "The sound of silver talk to me/makes you want to feel like a teenager/until you remember the feelings of a real live emotional teenager/then you think again." The song itself is the most ambient and, well, sweet, LCD has ever sounded, almost like the Fall meets the Orb, bubbling and gurgling in pop wonderment.

If you think you've heard everything Murphy has to offer at this point, oooh no, you are mistaken. It's dumbfounding to hear the album's closing number, “New York, I Love You But You're Bringing Me Down." Suddenly, Murphy has morphed into a hybrid of Tom Waits and Daniel Johnston, alternately between a piano troubadour and warbling singer-songwriter. The bitter love song to the city of New York is genius, right down criticisms like, "so the boring collect — I mean all disrespect/In the neighborhood bars I'd once dreamt I would drink/New York I love you/but you're freaking me out." There is nothing in the LCD Soundsystem oeuvre that prepares you for this balladry that Murphy just waltzes into like he's been doing all his life, crooning, "Like a death of the heart/Jesus, where do I start?/but you're still the one pool where I'd happily drown." The song explodes into a pure show-stopper that would make Tom Jones proud, right down to the flagrant guitar solo crashes along until the tempo drops and the piano come back.

Maybe this album is just coming to me at the right time, but Sound of Silver doesn't really have a chink in its armor. Sure, it's only nine songs long, limiting the chances for deadweight, but the astronomical step-forward James Murphy has accomplished from the already excellent LCD Soundsystem is hard to fathom. If anyone will bring true respect to those studio nerds and turntable artists, Murphy could do it with Sound of Silver. It takes LCD Soundsystem from being merely a cute little act to a landmark in a time when music is grasping for its next big thing.