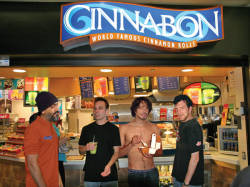 Soundgarden reunites! But not how you think.

Taking a quick break from Friday Workday sadness to catch up on the important news I'm missing, I'm shocked to hear that grunge legends Soundgarden reunited today! The world's truthiest reporting outlet has the story:

SEATTLE—Members of the popular 1990s grunge band Soundgarden shocked critics and fans alike Tuesday, appearing together publicly for the first time in more than a decade after accidentally running into one another at the Northgate Mall Cinnabon.

The unplanned 15-minute reunion was the result of a number of unrelated events, including lead singer Chris Cornell stopping by the baked-goods franchise to buy a Caramel Pecanbon, drummer Matt Cameron taking a break from shopping at the nearby Banana Republic, bass player Ben Shepherd walking by and noticing his one-time bandmates in the food court, and former guitarist and Cinnabon daytime supervisor Kim Thayil working the 10 a.m. to 6 p.m. shift.

Okay, so it's not the reunion the rock world has been waiting for, and maybe The Onion isn't the most repuatble news source in this age of rock-solid reporting from CNN, The New York Times, and Fox News. And yes, I'm now completely jonsing for a Cinnibon. But Soundgarden, people! Now could be the time!

God, I love that image. Thanks to The Onion for making me laugh during a busy work day.