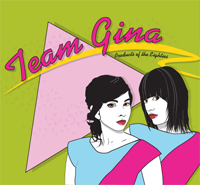 Products of the Eighties

Team Gina's newest release Products of the Eighties sports a unicorn on the front of the cd. Unicorns are possibly the coolest fantasy animal ever, and while I don't prescribe to a hot pink and neon green color palette and I'm not in the habit of wearing fishnets under leg warmers, this retro-dance jam duo makes the eighties almost seem cool (again).

After meeting and bonding over identical first names, in spelling and pronunciation, Team Gina was born. Their mantra seems to be ridiculously danceable feminist hip hop delivered by means of raw vocals over sparse Casio beats. Picture two headbanded, heel-wearing sexies sucking on gigantic lollipops and hitting on your kid sister outside of the sneaker store: this is Team Gina.

Reminiscent of Gravy Train!!! or Peaches, with a hint of Jewish white boy rapper MC Paul Barman, Team Gina lay it down with glitzy panache, but not without worthy purpose. The Ginas meld slumber party worthy shout-alongs with liberal political leanings in a very self-aware, and for lack of a better word, FUN way. They're educating us about AIDS while slathering the track with synthy Milli Vanilli beats. They righteously hail the wonders of breasts, theirs in particular, touting "if my tits were a hotel they'd be four stars". Maybe I've been listening to too much Team Gina, but "Boobies" is a breast cancer awareness advertisement waiting to happen.

Pop culture, especially eighties pop culture, seems to be a favorite topic of the Ginas. Dropping references to everything from the Garbage Pail Kids to Saved By The Bell to the Oregon Trail computer game, Team Gina professes their love for a much loathed, or much loved depending on how you look at it, decade of excess. It's not all games for this smokin' lesbian outfit though. They have a liberal message to spread, though they don't bang you over the head with it. They simply lay down some phat beats and cheerleader chant their funktronica way into your heart. Their mission is fun, and their message is tolerance and knowledge –> which is power!