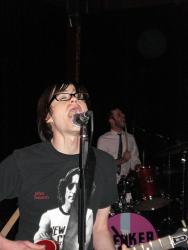 Speaker Speaker, the Don'ts, and the Apple War

It was a cold and desperate night on Capitol Hill with Winter’s last gasp hopefully beginning to loosen her cold fingers from our throats as I walked down to the Comet to catch some locals bands and humbly report my findings back to you. I had heard good things about two of the bands playing tonight and the other was from out of town and a shot in the dark that anyone with a passing interest in up-and-coming artists wouldn’t mind taking. Without further ado, here’s the skinny:

This was Seattle band the Apple War’s first performance at the Comet but an innocent showgoer would have never known as the place was a zoo, packed to the gills at 10 PM. The most striking aspect of the Apple War was their remarkably steady rhythm, which created a rock solid base for the style of rock you hear more often from across the pond than around the Sound. Using standard instrumentation along with pedals, xylophone, and organ on nearly every song, the band harkened to the Bends-era Radiohead, Snow Patrol, and even a bit off early-to-middle career U2. The four-piece’s quality progressions created music with the intensity of a band on a ten foot stage rather than on the floor of the Comet. At times the performance seemed a bit flat and not that personable, incongruous with the nature of the music; however, this flaw could certainly be overcome with more time together in front of an audience.

San Francisco’s the Don’ts were extremely outgoing on stage and definitely made the effort to reach out for new fans, but the while the performance was engaging, the music was not. There was a kind of Fishbone feel to the show and their music but that mysterious quality than makes you want to at nod your head vigorously just unfortunately wasn't there. I felt for the band, as it’s kind of hard recovering from watching a venue empty as you're setting up to play and when it’s your first appearance in a city. Hopefully they’ll make the trip back up and get a better and more comparable billing with which to present their rambunctious party music.

The final band for the evening was Speaker Speaker and I was more than pleasantly surprised by their performance. Their vigor and emotion filled the room, despite the late hour and the previous exodus. They have a great sound that filled me with the sense that modern punk-pop isn’t dead, that people still love and create good straight-ahead music that doesn’t need a gimmick or doesn’t require genre-mixing to have depth and quality. Their striking melodies helped make their performance the most powerful of the evening, with Collin McBride seemingly bearing his soul with each scream. The set was thoroughly enjoyable, with the band showing the passion of youthful love and heartbreak while also demonstrating that something special necessary to move an audience with excitement.

All in all not a bad night out. Speaker Speaker were awesome and inspiring and the Apple War is just out of the gate and appear to have a great future in front of them as well. Unfortunate circumstances for the Don’ts, but I hope they don’t give up on Seattle just yet.