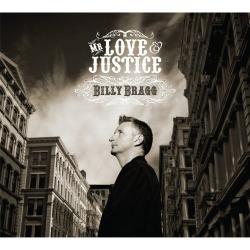 It is hard for me to say much about Billy Bragg that I haven't already said. He is one of my idols, one of my favorite musicians and dare I say the best songwriter alive today. He's recorded one of my top 3 favorite albums of all time (Workers Playtime), has a political playbook that I agree with on many levels and generally seems like a real swell guy. Of course, this makes it very difficult for me to review any new albums by Billy, but possibly not for the obvious reasons. Sure, there is a chance to be a real Homer about his new works, that they are perfect, great, fabulous, etc. However, I feel like my real problem is that I have such a personal relationship with his oeuvre that it is hard for me to feel like anything he releases now can keep pace with my perception of his canon. Sure, you probably shouldn't expect that musicians can keep churning out excellent album after excellent album until they die, but when you really love an artist like I love Billy, you really want to believe its true.

That is why I am always cautious when a new Billy Bragg album comes out. I'd have to admit that I haven't really fallen for a new Billy Bragg album since Don't Try This at Home. William Bloke had its moments while England, Half English with the Blokes, well, we try to ignore that. He had his two volume sojourn with Wilco for the Mermaid Avenue sessions resurrecting Woody Guthrie, but again, I couldn't really sink my teeth into those albums. Yes, good, but nothing like "A New England". Should I expect anything could be like that, probably not.

However, here I am, pleased to report that Mr. Love & Justice is good. Real good, probably the best thing we've heard from Billy in 10 years or more. He sounds like he's in his stride, taking bits and pieces of his last ten years of music and really creating a cohesive album that is tender, political and genuinely enjoyable.

If anything, Mr. Love & Justice closest musical sibling might be the much-revered Workers Playtime. Billy has packed the album with a lot of love songs, some overtly political tracks and generally has the same mood and tone of Workers Playtime. "I Keep Faith" just sort of arrives on your stereo, much like "Must I Paint You a Picture" with a little more kick, and you just have a feeling that Billy is hitting on all cylinders. "I Almost Killed You" has the humorous undertones of "She's Got a New Spell," but mixing it with some traditional Irish melodies and rhythm. It is a pure love song (contrary to what the song title might imply). "You Make Me Brave" might one of Billy's best ballads in a long time, tender and open with folk guitar and mandolin. The title track is a rousing song that encapsulates Billy's career, mixing love and politics and trying to bring them into harmony.

Billy is still political. Sometimes it works and sometimes it doesn't. It is a tricky proposition, whether it seems contrived (for a song, not the ideology) or not. "The Beach is Free," a song about the overabundance of private ownership of everything, falls together well as a pseudo-marching song that is lively and entertaining. On the flip side "The Johnny Carcinogenic Show" feels a little forced for its own good, reminding us that, yes, cigarette companies are indeed bad. Billy has always stood up for the oppressed, and "Sing Their Souls Back Home" is just that, a song about the homeless and neglected. It comes across as a Dylanesque anthem, while "O Freedom" has a more melancholy mood, lamenting the loss of liberty for the sake of "freedom." The song is dark and tense, making in abundantly clear that someone is being wronged by the government.

Billy seems to have found his new voice after trying out a some new directions over the last decade. He tried getting very political, he tried just being a normal guy, he tried out someone else's songs, but what he came back to is his remarkable ability to write songs that distill so much of life into a 4 minute package. Mr. Love & Justice, on one hand returns Billy to his roots but on the other allows him to expand what a lot of people might think of him today. Just by that ability to strike the balance, we can see the rare talent that Billy Bragg possesses and we better enjoy him while we can.