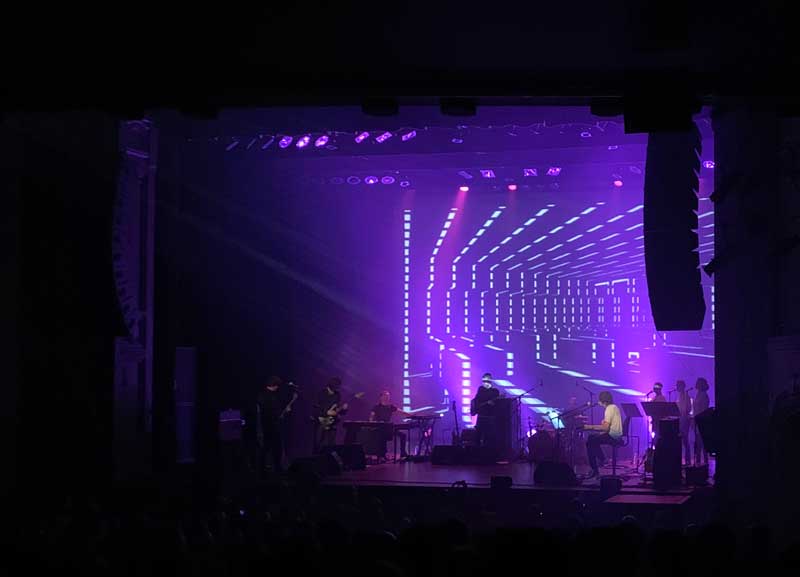 Spiritualized Live at The Moore Theatre

It has been almost exactly six years since Jason Pierce aka J. Spaceman and his band, Spiritualized, have performed in Seattle. In April of 2013, they were in town and played at The Neptune Theatre in support of Sweet Heart, Sweet Light. On that tour, two new tracks were debuted that would eventually turn up on last year’s new record, And Nothing Hurt. Those songs were “A Perfect Miracle” and “Here it Comes (The Road) Let’s Go.” Despite those songs being written immediately after Sweet Heart, Sweet Light, it took Pierce another five years to finish the record. For Spiritualized fans, it was worth the wait. And Nothing Hurt is a solid and consistent album that sits comfortably alongside the rest of their catalog.

On Wednesday evening, in characteristic form, a razor thin Pierce took to the stage at The Moore Theatre and performed seated while donning dark sunglasses. He had a music stand in front of him that he flipped through after each song concluded that likely contained lyrics and track notes for him to refer to. His band for this tour is expanded, including two additional guitarists, a bassist, a drummer, a keyboardist and three backing vocalists. Clearly, Pierce was reaching for a full, nearly symphonic sound and that is precisely what he delivered.

The main set consisted of seven songs from previous albums followed by And Nothing Hurt in its entirety and in the same order as on record. Pierce created a fittingly somber mood with the lighting, which illuminated mostly dark green, blue and purple hues along with a backdrop of psychedelic 1980s and 1990s visuals that at times resembled Atari graphics or Windows screensavers. After the conclusion of the new album, the band took a brief break before returning to the stage and treated the audience to a four-song encore.

From the previous records, the woozy “Shine a Light” from Lazer Guided Melodies and “Out of Sight” a standout from Let it Come Down were particular highlights. Unfortunately, there were no Spacemen 3 tracks performed during the concert, however, the frenetic garage rock “She Kissed Me (It Felt Like a Hit)” from Amazing Grace was great addition to the setlist that the displayed the punkier side of Pierce’s songwriting. Amongst the older material, three songs from the acclaimed Ladies and Gentlemen We are Floating in Space were also included, the fragile “Broken Heart” being one of the absolute best performances of the evening.

As mentioned above, And Nothing Hurt is an album that should be listened to from beginning to end. Because of this, choosing to play the record live in this manner worked well. “Let’s Dance” and “Damaged” came across powerfully in the live setting.

Imaginary Liz wanted to chare a few (short, incomplete) videos from the night that might illustrate some of  parts of the show:

Top photo: Spiritualized at the Moore Theatre on April 3, 2019 (photo by Liz Tollefson)