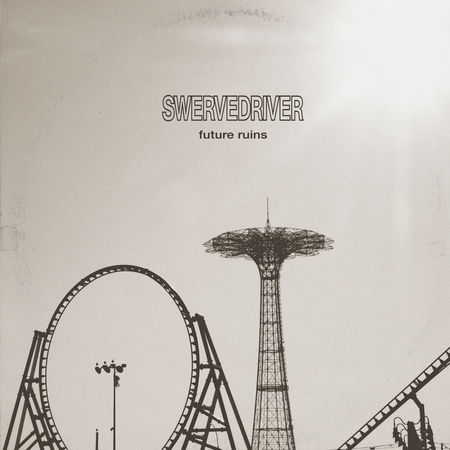 The movement of independent bands that came out of England in the late 1980s and early 1990s that frequently gets classified as shoegaze, either for the plethora of effects pedals that the bands used or for the melancholy and ethereal nature of the music, included so many amazing groups that the genre remains popular to this day. Amongst those groups, there is Lush, Ride, Pale Saints, Chapterhouse, Slowdive, My Bloody Valentine and perhaps the most rocking of them all, Swervedriver. In their original incarnation, they issued four stellar records in the 1990s before disbanding. After a seventeen-year hiatus, they released I Wasn’t Born to Lose You in 2015 and are now back with the another all around excellent album, Future Ruins.

For a band that gets lumped into the heavily atmospheric shoegaze category, Swervedriver is simply a great fucking rock and roll band. Granted, their music shimmers and is far better than your average formulaic guitar, bass and drums outfit. They have always near-perfectly merged sweltering melodies and aggressive guitar passages exceptionally well. Future Ruins provides characteristic examples of this approach. Though the new record might not have the wild amphetamine-fueled rush of Raise (1991) or Mezcal Head (1993), Swervedriver has aged gracefully and their recent albums are clear reflections of this. The songs are generally a little slower, but they are no less powerful and captivating.

“The Lonely Crowd Fades in the Air” pulsates with slow fuzz guitars and a woozy melody while the title track is a contemplative number that foresees our current world crumbling to pieces. The punchy “Spiked Flower” even recalls the criminally underrated Ejector Seat Reservation (1995) and “Everybody’s Going Somewhere and No-One’s Going Anywhere” features some fantastic psychedelic keyboards akin to “Riders on the Storm” by The Doors. The entire ten track record is solid from start to finish, but the final song, “Radio-Silent” might be the best song on the album. The guitars sparkle with copious amounts of tremolo while the bass and drums thunder along to keep the whole thing both loose and cohesive at the same time.

The band also just released a clear 12” vinyl EP on Record Store Day. Pick up a copy of that one in addition to Future Ruins, if you don’t have it already. And it goes without saying, but this concert is highly recommended.