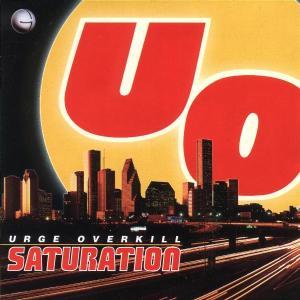 "The Stalker" by Urge Overkill

Many, many bands of the 90's alt-rock heyday are already long-forgotten, a mere decade or so since they captured everyone's hearts, or at least captured everyone's petty cash, only now to be relegated to the dusty used bins or the dark crevasses of CD shelves.

The shear volume of records released in the 90's boom is remarkable and 90% of the bands have vanished into obscurity – I mean, how many of you remember the like of Hum or Wax or the New Radicals or Fuel or so on. Yeah, it was nice to get a record deal, not so nice to be the night manager at Denny's 10 years later.

One band that truly needs to be resurrected for the sake of rock music everywhere is Urge Overkill. This Chicago band rocked harder than any trio should've by any right and their sonic production, although tragically short (three albums and one EP with their peak lineup of Saturation (their major label debut), one of the most underrated albums of the decade, and you'll see what I mean, especially on "The Stalker".

The guitars growl like a chained dog, the drums are like a machine gun and the bass pile-drives itself into your head like jackhammer. King howls the vocals like a lost member of Grand Funk Railroad and the sick vocal harmonies towards the end just add to the sense of dread and fear. This is rock lecherous at its peak – but that isn't even at what Urge Overkill was best. "The Stalker" is the most aggressive song on Saturation, so to really get the full effect what you need are monster headphones, a good copy of the album – ideally on vinyl – and a giant gold "UO" medallion like you would get if you joined the Urge Overkill fanclub (mind you, I didn't do this, but my friend Jack did and we were all awed by his medalliony awesomeness). Then you can sit back with your martini and really absorb the monstrous guitars and dirty coolness in which Nash Kato sings "I'm watching you and Fidel Castro/in the sand" on "Sister Havana" (why this wasn't a monster hit beats me) or the power-pop perfection of "Positive Bleeding.

All you need to hear is Nash sing "I live my life/with no control of my destiny" followed by the "woo-hoo-hoo" and you know that someone missed the boat in doling out the superstardom of the 90's … but at least now here's you chance to give the big UO another shot.