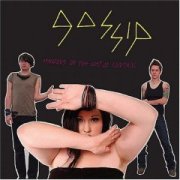 Standing in the Way of Control

The Gossip are an odd band. It's very easy to lump them into the post-punk, post-grunge garage band sound, especially with their Northwestern provenance, but something just doesn't fit there. Like their genre siblings the Yeah Yeah Yeahs or Mon Frere, the Gossip are driven by their charismatic female singer, but unlike the Karen O, Beth Ditto from the Gossip sounds like she's a 60's soul singer that got kidnapped by the MC5 when she was on the way to Motown. Now, if only the Gossip could put it all together, combining the remarkable asset they have with Ditto's voice with some songs that can match her power. Standing in the Way of Control is a good step in that direction, but still can sound a little too repetitive and restrained for its own good.

The Gossip are equal parts rough and tumble indie rock like the aforementioned Yeah Yeah Yeahs and former label-mates Sleater-Kinney (R.I.P.) and more dance-rockers such as the Rapture or Le Tigre. The band has always stated a goal of making people dance and that is exactly what they should be trying when you have a commanding vocalist like Ditto. They've cleaned up their sound a lot for Standing in the Way of Control to mixed results, sometimes they just seem to lack some of the free-wheeling energy you might expect from the band. The strength of the Gossip is in catchy, anthemic indie rock songs, a prime example being the title track from the album, "Standing in the Way of Control." Ditto's vocals alternate between rock and roll howl to soul swoon over the Franz Ferdinand-like rhythm section, turning it into a peculiar "Take Me Out" meets "Respect" sort of adventure. It's a great formula for the Gossip, albeit one they might go to the well for a few too many times — but when it works, like on the title track or the excellent "Yr Mangled Heart," you're left wondering how Ditto ended up in indie rock and not gospel. More standard fare is found on "Jealous Girls," a particular Sleater-Kinney-like tune musically backs replaces the snarl of the Kinney girls with Ditto's smoother voice leaving it a little less angst-ridden.

The slower turns on Standing in the Way of Control work to an extent, mostly thanks to Ditto's captivating voice, where a song like "Coal to Diamonds" survives as an early PJ Harvey-like an alternative torch song. But the music just doesn't feel in synch. This smoldering version of Gossip works better on "Holy Water," but still never reaches the sinister depths that it feels like the band wants it to head. The album ends on a promising note with the minimalist "Dark Lines," which makes you want to start the countdown until Ditto starts guesting for various electronic acts with the scorcher of a voice like that.

It's hard to deal with the Gossip as separate from the remarkable vocal talent that is Beth Ditto. No matter what else they might try, the songs are completely taken over by her vocals and most of the time, this is not a bad thing. The key issue with Standing in the Way of Control is the feeling that they could be doing so much more, but are caught in a loop. That being said, the album is an admirable stepping-stone for the band and at the very least, they've tightened their sound and refined their talent. Now, they just need to take it up a notch to truly allow their sound to expand and blossom the way it sounds like it could.