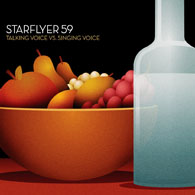 Talking Voice vs. Singing Voice is over-production at its finest. Between the synths, strings, punch-ins, overdubs and click tracks — this was one busy studio session. Being the 14th studio release Starflyer 59 has produced, one gets the feeling that Jason Martin isn't quite sure what to do with himself anymore. True, he could write an infectious pop record while blindfolded and taking a crap, but it's the lack of heart that always seems to keep this band from really breaking through.

Starflyer 59 can be categorized into three distinct eras: 1) the Silver drone-rock era, 2) the Fashion Focus kitsch-pop era and 3) the Leave Here a Stranger big-production era. The first era, which comprised of SF59's classically simplistic power-chord debut (Silver), lounge-infused noise-pop (Gold) and heartbreaking drone-rock (Americana), were without question the finest records released by Jason Martin & Co, on par with anything ever released by Jesus & Mary Chain, if I may be so bold.

But every record since — including TV vs. SV — is rich in style, but lacking in soul. But Jason Martin is "melancholic," you protest — he doesn't need soul. Believe me, there is a difference between melancholy and lethargy, and Jason Martin is the musical equivalent of Lexapro. The passion and sex drive are gone, replaced by Depeche Mode, Pet Shop Boys, Duran Duran and New Order studio stunts. Not that those are bad things, mind you, but the "bigger is better' mentality prevalent on SF59's more recent efforts is wearing thin.

Case in point: you may walk away from this record with a clever hook or synth line drilled into your head, but can you recall even one lyric of consequence? Now, I don't know Mr. Martin personally, although I've met him three times. At each of our brief encounters (typically after an excruciatingly dull live performance), his "cool-hand-luke" personality impressed upon me that that he was just another boringly aloof hipster, but now I have come to suspect that he is just as bored as we are. I'm sure Jason Martin would like to punch someone in the mouth every time they bring up the "old SF59" vs the "new SF59," but for my money, I'd stick with the early stuff. Their classic arrangements worked well.

I heard Tooth & Nail is re-mastering and releasing their debut Silver. If you are new to SF59, I'd save your cash and wait for that.