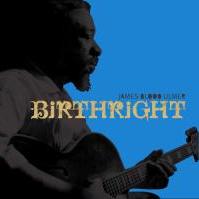 Just when you think that nothing new can come of the blues, here's James "Blood" Ulmer to prove you wrong. White boy blues-rockers and houserockin' party bands take note: this is to-the-bone raw soul.

Don't go throwing around words like "roots" and "tradition." Blood's guitar-playing is as idiosyncratic as ever, possibly more so in this new setting. Birthright is Ulmer's third exploration of the blues, and each has taken a different tack. He plays unaccompanied throughout this record, and the result is an untethered six-string attack. Despite the fact that there are only two covers, the material is made to sound ancient by Ulmer's creaking-oak-tree voice and the way his meandering acoustic picking sounds like an attempt to arrive at something half-remembered but deeply felt.

Ancient here doesn't mean archaic; this is still the Ulmer that embodied the concepts of Ornette Coleman's harmolodics for decades, the mad scientist that fused funk and rock and jazz in an underground downtown NY laboratory. There are traditional blues licks all over this CD, but they emerge from a whirlpool of invention, only to be pulled back down again as Ulmer's fingers wander on down the fretboard.

"High Yellow" in particular evinces Ulmer's passionate approach. Hollow strums ring out behind pinched note and the buzz of strings, the squeak of wood. There is never an instant where the tactile presence of the guitar as physical entity is not intimately present. Blood sounds like he is whittling away at the instrument as he plays hard enough to draw blood.

"Geechee Joe" is another tune that sounds traditional but is actually an autobiographical tale of Ulmer's grandfather. The music shows off a certain cheery sparkle that is unique to Ulmer. It is an odd sort of atonal major-key sound, slightly atonal in a pleasing way, shifting subtly like the sun passing behind a bank of clouds.

When, on the opening track, Blood sings that he's going to "Take My Music Back To the Church," that's his music, don't forget; not the music of a race or a people or a culture. His music. He brings his music back to the church to prove to them that the blues come not from the devil, but from the soul of man. And Birthright should be all the evidence the church should need; it is soul laid bare.