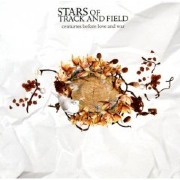 Centuries Before Love and War

For those of us who have been avidly following Stars of Track and Field since their You Came Here for Sunset Last Year EP days, Centuries Before Love and War is a composition of euphonious delight, with a slight tinge of disappointment. I'll start with the slightly disappointing news: three out of the ten songs are duplicates from the EP. I know it's a bit selfish of me, but I can't help but get that feeling — you know the one — where all of a sudden, I as a fan am not quite so special for having heard all of a band's original classics, because now everybody can listen to them. I guess I'll just have to latch onto "Let Ken Green" and "Foreign Snow," the precious two remaining EP originals, with all of the selfish elitist oober fan-ness I've got left.

Now on to the good news: The album is amazing.

I may be biased (with my self-proclaimed oober fan-ness) but hear me out. Throughout the history of Western culture, many of the greatest works of music, theatre, and literature have followed a certain formula. They begin unassumingly, to introduce themselves and establish context; then they build slowly upon themselves, adding new elements and emotions; and finally these elements build to a climax, leading ultimately to a resolution. Stars of Track and Field songs encapsulate this formula. Of course, I by no means intend to aggrandize Stars of Track and Field to the level of history's greatest, but they are certainly in good company. I have not heard a contemporary band show a greater aptitude toward building a song from the ground up, save but for Coldplay in "Fix You" — and that was a one-time accomplishment even for them.

In stark contrast to the formulaic build of the music is the record's theme. The lyrics constantly allude to loss — specifically, loss of love by means of heartache, loss of life by means of war, and loss of faith by means of betrayal. They are poetic to the point of ambiguity, but not so much as to make them completely obscure. The spectral vocals of Kevin Calaba and the harmonies of Jason Bell seesaw gently between the loss of the lyrics and the build of the music, but never get swept too far to either extreme, while the percussion/programming of Daniel Baker Orvik provides a beautifully consistent framework for the music to construct itself upon.

Amid all of the contradictions in Centuries Before Love and War, there is balance, and there is progression.