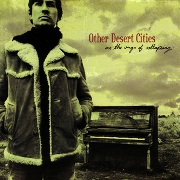 On the Verge of Collapsing

In an MP3 single-driven music market it's a rare occasion when a proper "album" surfaces. The results of which are usually delivered in the self congratulating and dreaded concept record format. On the other hand C. Charles Bowden's Other Desert Cities makes me remember why I like the idea of Album Oriented Rock in the first place. I'm not trying to be regressive here—nostalgia still sucks—but I've decided that when it's done right, I like the idea of cohesion throughout a whole collection of songs.

On the Verge… is a basic concept record of love lost. In case you were wondering, the formula goes something like this: Two lovers are trudging through life together. Times are tough but at least they've got each other. Every so often disagreements arise but love and affection keeps them together. The wife dies in a car crash (aka metaphor for divorce). The man goes through the process of denial, disillusionment, and pain but somehow the surviving lover will make it through.

The concept is simple and has been done before. Not that I'm trivializing the concept — when a common theme is executed well it resonates. The reason I believe On the Verge will work for general listeners is that redemption makes for a good story line. And for the cynics that just sneered at that last sentence, you're not looking for new music to stretch your sensibilities anyway so you can stop wasting your time with this review.

Bowden's Other Desert Cities self-titled debut from a few years back was definitely a fuller sounding, band-oriented effort. There was a band democracy that fueled the songs and the idiosyncratic interplay between the band members could be heard. Sometimes it worked, other times it was just kind of so-so. Normally I prefer group oriented efforts. But On the Verge's simple bare bones singer songwriter, Neil Young-like country minimalism serves the theme of the collection so well that I couldn't help but be drawn in.

The sound of the recording on this release — aptly handled by the nimble knob turning capabilities of Matt Wignall — is a defining aesthetic factor. The under realized tones of the instruments strategically makes room for the sincerity of Bowden's sometimes-warbling vocals and there's a tasteful use of eerie, ghostly reverb drenching the tunes when it's appropriate. Trumpet and lap steel make appearances in a less is more economy and other than that it's mostly Bowden, a guitar, bass and a crummy un-tuned rinky dink drum set.

If there is any weakness to be pointed out in this collection — and this is just nitpickiness on my part — it would be the two instrumentals. The first of the two, "Heavy Waters", seems to represent the husband characters thrust into disillusionment after the death of his wife. The tune is effective in what it gets across in a sort of staggering-drunken-psychotic-circus-waltz kind of way but it seems to me that this has been done before — though I can't quite pinpoint where. It's just a little too predictable. The other instrumental is the tune "Recovery" that aurally represents the first glimmer of hope two songs before the gospel-esque "Heaven Bound Train" banjo plucking hoedown ending. But the only reason I can come up with for not particularly liking the refreshing, thoughtful warm spring morning niceness of "Recovery" is that I prefer the sound of the flute in an ensemble instead of as a solo instrument.

On the Verge of Collapsing is a musically minimal CD that draws the listener in to a simple story line that has kept most of our lives impossibly complicated at one time or another. Refreshingly, Bowden doesn't have to cleverly psychoanalyze the intricate details of each character's failings. Instead, it's the sense of emotional depth in Bowden's delivery that takes you to that place in a believable way. The melancholic redemption of the story is done well as we all hunker down for another grey, damp season.