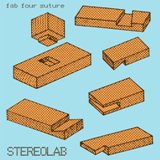 It's becoming an increasing challenge to review a Stereolab record. Not because they have continued to push their trademark space-age Euro pop into increasingly complex and un-definable directions, but rather they have essentially recycled the same record over the past decade. Everything that can be said about their sound has been said a hundred times before.

Cycles seem to play a strong theme throughout Fab Four Suture. Not only because of its repetitive-to-the-point-of-monotony opener and closer "Kyberneticka Babicka Parts 1 & 2," which were both recycled from an EP by the same name last year, but also because this record marks a return to the Beggar's imprint Too Pure, where the band got their training wheels before spending ten years with Elektra.

That the songs on Fab Four Suture were originally released as a series of six limited 7" records should be of little surprise to fans who recall Stereolab's pre-Peng! singles which made them close-to-famous fifteen years, at the time when Stereolab was still developing what would eventually become their detached 60's vintage-synth and Bosa Nova lounge infused recipe. Although this formula has been present in their work since the very beginning, it really began to push its way to the front of their records as early as 1996's masterpiece Emporer Tomato Ketchup, and by 1997's Dots & Loops, it became the dominate structure.

Like the scientist who obsesses his whole life over a complex math equation, only to become an eccentric hermit frightened of his own shadow, Stereolab have seemingly spent the last eight years trying to exact a formula that they have already perfected a long time ago. As a fan, they have become to me like that strange but endearing Aunt who gives the same present every year for Christmas. You either grow to adore and even rely upon her constancy, or you come to despise her predictability.