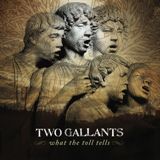 What The Toll Tells

For Adam Stephens and Tyson Vogel of San Francisco's Two Gallants, touring is life. At least lately. This twosome seems forever on the road, sharing their distinctive music with rapidly growing audiences throughout the country. Their sophomore release What The Toll Tells is the stunning product of this relentless tour schedule. Crafted and honed on the road, these tracks capture Two Gallants like a lightning bug in a jam jar. Their ferocious onstage intensity spills into this record, imbuing each track with an ineffable quality that reverberates in your bones and fixes in your mind.

"Las Cruces Jail," a longtime favorite of mine, starts the record brilliantly. A marriage of Adam's fiercely raw vocals with crashing cymbals and a furiously picked guitar melody, this track builds like a carousel spinning slightly off its axis, tipping and whirling as it gains pace. Tyson's huge cymbals and crisp, sparing drums stand out without overwhelming the songs, the ideal partner for Adam's guitar. Close on the heels of "Las Cruces," "Steady Rollin'" swaggers wistfully through back room card games, dimly lit bars and well-worn pool tables strewn "from the Bowery to the Barbary Coast." On "Long Summer Day," Adam fashions a rollicking Old South tragedy, told from the perspective of a black Southerner denied the vote. As the sticky heat of the South seeps out of this track, the lyrics juxtapose the legacy of Jim Crow with the assertion that "it ain't life if it ain't free." Here and throughout, Adam's vocals sound as through he's wrenching the words from his throat. As he adopts different tones with each track – the quiet of a deathbed confession, the vibrance of whiskey-made mischief – he makes each word genuine, as only a gifted raconteur can.

In support of this latest release, Two Gallants are back on the road, appearing at SXSW before embarking on a lengthy tour of the US. While they don't yet have a Seattle show on their schedule, fear not, Gallants lovers – I have it on very good authority that they'll be back up this way in late spring. In the meantime, get yourself What The Toll Tells. It will tide you over (and then some).