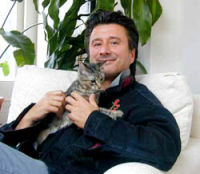 I had to wipe my weekend-sleep-hangover eyesballs and read this article through a couple of times before I believed it.

Apparently, as legend would have it, former Journey frontman Steve Perry (who as far as I know, has been in seclusion while the band tours for the better part of the past decade or so), entered a recording studio and heard punk band Guff recording. He was so inspired by their sound that he returned two days later with a song that wasn't used on the last Journey record called "I Can See It In Your Eyes" and offers the track to Guff.

The band accepts, and Perry not only records them performing the song, but also provides backup vocals on the track. It will be featured on their next album.

Um, wha? I'm still not sure that Aversion isn't pulling my chain with this article, but there's the news as I read it…