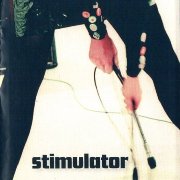 Stimulator is the synth-drenched, big-beat brainchild of Geoff Tyson, who studied under axe-bastard Joe Satriani and was the chief guitarist for Snake River Conspiracy, and Susan Hyatt, whose previous band Pillbox broke into the Top 20 in the UK. (Where she also works as a "VJ.") Hyatt was the one providing the "realism" for the memorably trashy Gina Gershon chick rock flick Prey For Rock n' Roll.

This last bit is somewhat noteworthy, as the band's debut album sounds like music made for a new fake documentary about an 80s nostalgia band — if the actual band was Garbage supplying the music, and Shirley and Butch had actually forgotten what 80s music sounds like. Even when they pick a representative cover, it is Olivia Newton John's "Magic," a bit early for what most people consider the sound of the decade, and it is performed melodramatically and without a hint of irony.

It is this lack of self-consciousness that makes Stimulator hard to dismiss, as I think the band's similarity to Garbage in its aggressively psychosexual lyrics, powerful female vocals, and techno-enhanced riff alternative rock makes it very listenable. The faux Reagan-era nostalgia of police siren sounds and squiggly synthesizers, and that decade's ambiguity and ambivalence of lines like "He's just a guy I want — looks good in drag" ("Mixed Singles"), makes for an enjoyable combination.

This is a more interesting album than you would assume from the Devo-derivative bondage-imagery of the cover, which sort of makes the insubstantial nods to the past seem like an obtrusive gimmick. Seriously, if this album had come out around the same time as Elastica's debut, no one would have even thought it was that retro. (it is now, though, to THAT era!) They would have just thought it was a very well done, if humorless, commercial alt-rock album with occasionally kinky lyrics. Nothing wrong with that at all; but nothing particularly sincere about it either.

Still, every song on their eponymous debut has a few hooks or a manipulative, mutilating image or two that sticks in your head, and if they drop the shtick a little or show a bit more vulnerability, the band's name might be considered an understatement.