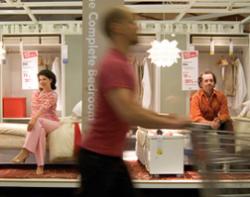 Autumn chugs along, and so does the local theater season. My latest round of adventures therein got a most auspicious start last Monday with The IKEA Cycle, local genius Keri Healey's little series of little vignettes staged within the product showrooms of the Renton IKEA store.

Yes, you're reading that correctly. It happens in IKEA.

This turned out to be my favorite theatrical experience of the four reviewed here. Cycle's well-acted slices of faux domesticity were fantastic, but in all honesty it was more fun to see puzzled shoppers happen upon the performances and try to figure out what the fuck to do next. (One perplexed guy actually re-directed his squeaky-ass shopping cart in the Living Rooms area so as not to disturb the goings-on… but actually drew more attention with his avoidance. Hoot.) The Cycle ends this Wednesday, so act fast — and check out the fab new holiday supplies and other cheap-as-shit IKEA wares while you're down that way.

Tuesday's performance of the new Intiman mounting of John Steinbeck's The Grapes of Wrath was, and this is probably due to the previous evening's dose of weird fringey deliciousness, rather dull.

First, the good things. Beth Dixon is fantastic as Ma Joad (bringing to the boards the old-school charm of Ma Kettle mixed with Auntie Em), and Josephine Howell's vocal might adds significantly to the several minor characters she inhabits. The scenery is great — dusty and barren and subfusc, it appropriately recalls Dorothea Lange photographs and their delicate, desolate grief. The mobile beat-up truck used by the Joads to travel from OK to CA is cool, and almost seems to take a cue from Book-It's Travels With Charley adaptation from last year… though this current play doesn't capture the crackling Steinbeckian spirit nearly as well. Much as I hate to say it, I sure was needing a nap by the end of the first act (and, truth be told, until the stormy and emotional last 10 minutes or so of the second).

Don't get me wrong — I'm a big fan of Dustbowl lore, and primal family sagas, and the classic source novel, and Steinbeck's work in general — but this production's good elements (those visuals and few wonderful performances) just don't mesh with the so-so ones (the not-as-great performances, mixed-bag dialects, and uneven pacing). Oh well. Most of Tuesday's audience seemed to enjoy it, and there were real sobs brought about by the heart-wrenching finale. Plus the show is doing well box-office-wise (it just got extended a week to 11/19), so that has to count for something.

The Seattle Rep's refreshingly weird David Esbjornson-programmed season continued Wednesday with the world premiere of Ariel Dorfman's Purgatorio, a contemporary take on Jason-and-Medea myth that feels like a longer, grander (and no less enjoyable) staged Twilight Zone episode. Its two-character, single-set nature seems better suited to a fringier venue (like Theater Schmeater, speaking of Zone) than the big-ol' Rep stage, but if you're down with plunking $40+ then more power to ya.

Charlayne Woodard is excellent as an unnamed woman at turns interrogating and being interrogated by an unnamed man (Dan Snook) for various (Medea-like) crimes of passion, making for a tight, compellingly cerebral 1.5 hours of bickering and repentance and philosophical transcendence which I won't go into detail about here — I reckon the mystery will add to your experience.

We've come to expect fantastic production design from the Rep, and Purgatorio doesn't disappoint there. The action all takes place in a clinical white room, which sounds simple, but the set is really quite spectacular; a very cool lighting reveal at the end makes it all the more harrowingly Zone-ish.

Another two-character piece (with another impressive set) that's just as brainy (but not nearly as short-n-sweet) is Steven Dietz's award-winning Lonely Planet, which previewed Thursday and opened this past weekend at Northwest Actors Studio. And I don't know whether it was the long week, the residual leftover-Halloween-chocolate buzz, or the fact that my expectations were zero, but I enjoyed the hell out of it… at first.

The story revolves around the odd friendship of map-store owner Jody (Nathan Hicks, who also directed and who is kinda sexy in a Nikolaj Lie Kaas sort of way) and his friend Carl (Brandon Ryan), a compulsive liar with a chair-collecting penchant. The actors are very good, and deliver their plentiful plot-driving dialogue with the comfortable rhythms of people who spend a lot of time with each other; their insightful conversations and audience asides effectively convey human suffering and fear, tempered with melancholy-laced affection.

Impressive text, impressive actors, impressive set. The only problem is that the thing is too damn long. (The second act in particular brought back Grapes of Wrath nap-needin' memories for real.) A bit less artful lingering silence could have eliminated at least a half-hour of the 135-minute (!) runtime. Bottom line: this is a thoughtful and engaging piece when it's not being too deliberate for its own good.