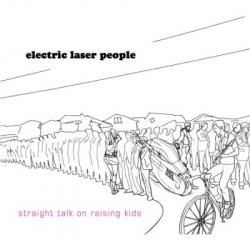 Numerous talented bands come to mind while listening to Electric Laser People's debut record Straight Talk On Raising Kids. They masterfully mix musical genres and have the sardonic wit of Ween; they produce a playful immaturity reminiscent of early Beastie Boys; their half-rap/half-rock melding smacks of LCD Soundsystem and Beck … Electric Laser People remind me of all these bands, but to simply label them with a "they sound like ____ " stamp would be disrespectful to their unique talent. I'm not sure how to label the album genre-wise, but it doesn't matter — this is party music to the core. If we lived in a fair and beautiful world, ELP would play at every dance club and every house party (and everyone's lives would be much better).

The Boston band's back-story is "born from laser light, Electric Laser People rise from the sands and rock shit," and their outfit consists of vocalist/bassist Dan Paluska (also known as Six Million Dollar Dan, or 4.5 Million Euro Dan), guitarist Grant Kristofek (aka Gee Krisco), keyboardist/vocalist Jessica Riley (Lady Lazer J), and drummer Cullen "The Cullenator" Corley (though drums on the album were laid down by original drummer Charlie "Clark" Kemp). A peek at their MySpace will quickly reveal their tongue-in-cheek nature and their unpretentious attitude.

Like I said before, the music jumps around from rap to rock to funk to dance to basically anything the band wants to play, but it kicks things of with "Guilty," a nicely paced rock song featuring prominent sing-talk style of vocals which are commonplace throughout the album. While the high points of the album are definitely their unique blends of funky rap and rock, ELP sprinkles solid guitar-based songs amongst their repertoire — songs like "X Girl," "Yer So Confident," "Machine," and "It Ain't Over." These, along with the first track, are all genuinely fun rock staples, but if the entire album consisted of such tunes it would not have piqued my interest nearly as much.

The real meat of the record comes from tracks like "Disco3000" — a song that opens with a simple story about the band traveling to the year 3000 only to discover the future, thanks to scientific advancements and interracial mixing, is entirely full of beautiful people just waiting to get down at clubs. It is a funky party song with excellent beats to match its comical tale of futuristic disco beauty. The same goes with "The Makeout Song," which is a standout track on the album and may be the perfect party song in the vein of "Fight For You're Right (to Party!)." Putting their juvenile persona on full display (is it ironic that the members met as MIT graduate students?), the song displays a ridiculous sense of humor and a chorus that hopping partygoers can repeat incessantly with their hands held high.

"TYCO" may be the perfect example of how ELP is at their best when throwing all seriousness out the window. The track is a beautiful ballad mixed with an SNL routine — a song designed as a background to "Take Your Clothes Off" to. It is perfectly played out — a slow, moving song mixed with echoing guitar solos and genuinely touching vocals belting away with energy and emotion. It is excellent parody and the joke is setup nicely by the preceding track "Words Couldn't Do Justice."

The album finishes with two fine songs. "Ain't Nobody" is a musical mixture of electronic pulsings, finger snaps, shakers, wailing guitar, and the catchy lyrical repetition of "Ain't nobody who loves you more than you." The last track, "It Ain't Over," is my favorite of the guitar-based songs on the album. With a driving guitar solo and a steady drumbeat pounding behind the chanting of "It ain't over, it ain't over yet," the song serves well as a closer. Both these tracks, as well as most of the record, provide wonderful hooks and catchy rhythms no matter what musical style the band is experimenting with.

I enjoyed listening to Straight Talk On Raising Kids, but I felt like I didn't use the music to it's full potential. Playing the album on my iPod often made me giddy and excited, but I wanted to hear them with a large group — maybe friends, maybe strangers — it doesn't matter. It sounded better when I played the music for a small group in my car, but I still didn't get the chance to blast it in a party setting. If you buy the album for a party it will surely impress you and your guests — Electronic Laser People make music that works best when it falls on many ears at once.