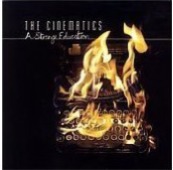 The new album by Bloc Party The Cinematics contains 12 glossy, well-polished regurgitations of the last few years' worth of alterna-radio hits. Yawn. It's not that the Scottish band has made a bad album; it's just that it's so damn familiar, and the pop-rock innovations of 2004 are now the old hats of 2007. Perhaps The Bravery The Cinematics didn't get the memo.

The songs on A Strange Education are dripping with suave production, fierce hooks, jangly guitar licks, danceable beats, and all the ingredients of a hit record among the mainstream "alternative" set. It is not unlikely that the snappily-dressed members of Kasabian The Cinematics will find themselves tearing up the charts stateside on the strength of songs like "Chase" and "Keep Forgetting," if recent history is any indication of the current tastes of our masses. And surely those masses will delight in adding another 12 smash hits to their Killers-infested playlists. The rest of us, though — the ones hungry for new flavors — would best pass on this, if for nothing else then for the hazard that one may risk by listening to this record while, say, driving or operating heavy machinery.

Editors The Cinematics keep things up-tempo for the course of the album, save for the final song, "Home," which sees vocalist Scott Rinning attempt his best Thom Yorke as he visits the upper range of his voice. At times, he more closely resembles Kermit the Frog during this bare-bones finisher. Up to this point, his vocals have been smooth and steady; this "Hidden Bonus Track" throws a little imperfection and vulnerability into the mix, but it's actually somewhat welcome after the string of flawless ringers that precede it.