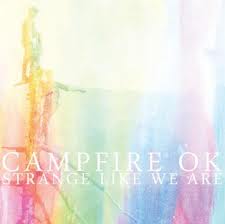 Campfire OK‘s debut album Strange Like We Are is a smorgasbord of tasty sounds, slowly-simmered songs, and crackling good production. About a half dozen well-trained and eager-to-please musicians (known mysteriously only by the last names Van Der Krimp, Dagworth, Hannigan, Goodweather, Exworthy, and Appleby) juxtapose delicate picked and plonked, emotionally earnest slow jams with clanging hoe-down choruses. Its twelve tracks feature a whole lot of rocketing and crescendoing 88s (piano), everybody-join-in-percussion, and even a softly glowing free jazz lilt between the occasional barbed chorus.

Lead single “Hard Times” could be the stiff upper lip anthem for the contemporary stay-home and stop-working and start-to-dream generation; next up, “Strange Like We Are” fuses Keane-ish keyboard balladry with Modest Mouse/T. Heads disco-meets-roots stomp and swagger. Weirdness, addictions, and abandonment are all themes, but are rarely this well-woven into a gazebo on the marsh-expressionist soundtracks. Sometimes the cynicism of “I Would Like Everything” bothers me, seeming a little too critical of its subject beneath the NW swamp juice. I am going to guess the accusation of disingenuousness (“Your relapse is just a cry for attention”) might be more an admission of self-delusion than finger-pointing.

Fans of Hey Marseilles or The Decemberists will find this familiar sounding, but a little more restrained conceptually than the former, and far less idiosyncratic than the latter. And sweeter and looser than both, for sure. Will they attain the majestic use of canvas either of those bands are currently capable of? From the over-44 minutes of warm and real goodness on their debut, they seem to have the paints and the passion (and the instruments, oh so many different kinds of sounds) to start the art.