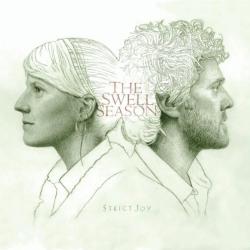 I want to sit you down and talk — I want to pull back the veil and find out what it is I’ve done wrong, Glen Hansard croons earnestly. It’s the first line from the opening track of the new Swell Season album, Strict Joy. The song “Low Rising” is at once classic Hansard — heartache, folklore, anguished cries in the middle of a set of casual, life-altering sentences — and also a gorgeous representation of what old fans will refer to as the ‘newer’ signature sound of the Swell Season. Hansard’s achy, telltale traits are layered in with Marketa Irglova’s delicate shared-lead vocals, which vary across the tracks from barely-secondary to her Damien Rice-esque lead on “Fantasy Man.” Add in some catchy choruses, two parts major-label caliber production, and a few members of the Frames — and you’ve got the perfect follow-up to the Once soundtrack.

Having been a Frames fan for quite a few years now, I was happy to hear the full-band style of the Strict Joy tracks carrying hints of a restrained, filtered-down hint of their tone, as Colm Maclomaire, Joe Doyle, and Rob Bochnik are all contributing members to the Swell Season sound. Which is not to pigeonhole the Swell Season as a side-project of any sort, as it solidly stands on its own legs among Frames and non-Frames albums alike. The dozen tracks wind the listener from the feel-good ache of “Low Rising” to the sad, haunted “The Rain,” crossing to the distant, staring-out-the-window-of-the-train movie-scene sound of “Paper Cup.” The beginning of the album never stalls out, laying out tracks cohesively one after the other, seamless but not too similar; constantly pretty and yet shot through with knife-in-the-gut writing that begs you to pull the car over and pay attention.

There’s a one-two-three one-two-three catch to “Feeling the Pull” (and I’m feeling so small / against this big sky tonight), the sad, sparse lovestory of “In These Arms,” and more of Marketa’s sweet lead later in the album on “I Have Loved You Wrong.” Two-thirds of the way through Strict Joy, the more experimental side of the Swell Season starts to push through, borrowing well-worn sounds and making them the band’s own. “High Horses” is backed up with a few layers of vocal tracks and wandering, jangling, peak-popularity Tori Amos piano, begging for your attention through peaks and pauses and indirectness. “The Verb” takes some undertones from “God Bless Mom” (off of the Frames live album, Set List) and “Love That Conquers” backs itself up against the best of Jesse Harris and Paul Simon’s offerings.

Finally, the last two tracks showcase and circle back to the classic sad bastard sound that, for this listener at least, only Glen Hansard can offer up. “Two Tongues” gives a classic, all-or-nothing abstract telling of a push-pull relationship stage, never quite settling on whether things are coming or going — while “Back Broke” swoops in and closes the album perfectly: heartbroken and hopeful, with the undertones of a developing sound that leaves the listener hanging on to the very end, both to hear the next chapter of the story and what’s in store for the Swell Season as a whole. Long-standing Frames fans and new, Once-driven Swell Season listeners will both do themselves a favor to pick this album up — every listen brings this album closer to becoming one of my top albums of 2009.