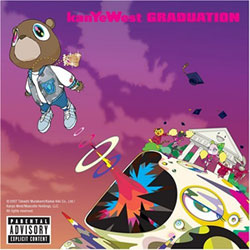 I’ve come to the conclusion that Kanye West is some sort of vampire that can put us under his thrall. Why? Well, I have both of the previous Kanye West albums and after listening to “Stronger” about 10 times in a row, I am seriously considering purchasing Graduation. Why is this odd? Well, it is odd because every time I look at the previous two Kanye albums, I wonder why I bought them in the first place. Sure, they have a couple good songs on them, but they are nothing like the classics such as The Black Album or Straight Outta Compton. College Dropout and Late Registration are fluff, light and airy, but lacking real staying power. So, what compels me every time Kanye puts out an album to go and purchase it? Is it the good reviews? Is is the constant Kanye hype? Is it Kanye’s ability to put out a killer first single (only to follow that up with much less impressive songs) – heck, this time he even broke out the ridiculous Daft Punk sample, how can I resist that? I have no idea. I’m sure even by writing this column, Kanye is now hunting me down to tell me I’m conspiring with MTV against him. You’ve got quite the deal with the devil, Mr. West, and your thrall is powerful. Powerful enough to get me to go downtown and buy the new one? Maybe … no, must fight. Can’t become the bug eating toady … must stop myself … accck!