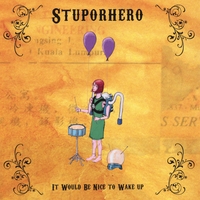 It Would Be Nice To Wake Up

"Couple" bands can be an iffy prospect, often falling into the kind of obsessive, closed-circuit "let's bathe each other in scented oil and write sappy two chord folk songs about one another all the time now, shall we?" gooey love fest along the lines of John and Yoko, or, on the extreme opposite end of the spectrum, the venomous, imploding, "let's use our music to throw fragmentary grenades at one another while we spiral downward into the acidic bile of our own intense mutual enmity, shall we?" approach perfected and personified by the entirety of Fleetwood Mac. Stuporhero, on the other hand, just seems like one of those really fun couples that are good to go get a drink with and call each other things like "fucktard" and "ass-face" as honest terms of endearment.

Comprised of husband and wife team Will Troy and Jen Garrett, plus their creepy mannequin drummer (and, I like to imagine, surrogate child) Chuckles, Stuporhero plays the kind of easy-going, fun, occasionally quite striking indie-rock that causes the listener to feel they have been sucked back to a really awesome summer day in 1994 when you could smoke some bad weed and ride around in your friend's Geo Metro listening to a cool tape of a band you had seen the night before that nobody else had ever heard of and feel without guilt like you had accomplished your bit for the day.

Obvious touch-points that come across in terms of influences would be Neutral Milk Hotel, the straight-forward fuzz pop of Guided By Voices, and the goofy lyrics and self-effacement of early Flaming Lips, all tempered with a strong sense of song-writing economy that more than likely springs from Troy and Garrett's stint in local punk band Tarantulada. The couple have great, breezy cool chemistry in their vocal interplay, with Troy's Al Larsen-esque talky-yelpy thingy layering nicely with Garret's breathy, Kim Deal-esque delivery, and the sense of fun that they are having throughout the record is a good time that they seem more than happy to share with the listener.