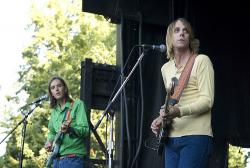 Hippies! Suddenly I was transported to the Oregon Country Fair, right here in Redmond! Beachwood Sparks (actually from LA) were a very cute, very farm-centric band clad all in tie-dye and flannels. Their Grateful Dead inspired music was a soothing antidote to the Comets On Fire show that preceded them, almost a polar opposite.

Unfortunately they played to a very small crowd, I think everyone took off after Comets, either to eat or to go take aspirin and have a nap. The remaining crowd looked pretty wiped out as well. Apparently Beachwood Sparks haven't played in a while, but they gave us a nice little set before Green River (We could see Mark Arm pacing around backstage during their set). Their harmonies were sweet and the whole effect is just good-natured country pop, twangy little riffs and upbeat drums; there's nothing at all negative about their music.

In all, there were six people up on stage: two guitarists, one bassist, one pedal steel guy, a drummer and a girl hidden away in the back on keyboards. While their set wasn't overly remarkable, I did find it to be a fairly enjoyable early-evening show and give the band props for giving a great performance despite the small crowd and the odd time slot.