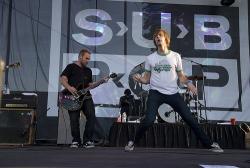 When I was 15 — not old enough to drive, but old enough to have a burning passion for music growing inside me — I spent much of my free time hanging with friends, listening to records, loitering around coffee shops, and toiling through record stores on the Ave (it's true – not much has changed).

One fateful day, while rifling through the ever-stellar used bin at Cellophane, back in its old location a few blocks south on University Ave, I struck up a conversation with one of the clerks. I was on a mission to find anything and everything "grunge"—excluding the sludge left in the used bins at another used record store on the Ave (which I won't name to protect the innocent. But I think you know where I mean.)

This dude proceeded to rundown Seattle rock history in two minutes. He was tossing out names like Pearl Jam, Soundgarden, and Mudhoney (duh, duh, and duh). He mentioned Mother Love Bone and Malfunkshun (check for the former; a bit of a head-scratch on the latter). The U-Men (who?). Oh, and Green River, this super-group of sorts that featured members of these now larger-than-life bands. I had lost him by those last two, but being impressionable and hungry for anything and everything, I latched on with zest and had to find some Green River.

We landed on the topic of the now infamous Deep Six comp, which collected tracks by many of those now legendary bands. Cellophane didn't have a copy (and had they, it would've been way out of my no-after-school-job budget). But the guy promised that he'd dub me a copy (yep, on cassette) and if I'd only swing by the store in the next couple of days, he'd have it waiting for me.

I credit that clerk – whose name I've long since forgotten – for awakening me to the sound that defined our city for the better portion of a decade and put us on the musical map indefinitely. Without realizing it, he effectively set the stage for every band I'd soon come to love, or at least appreciate for their impact on the local scene. Really, that dubbed tape probably ruined me, because since that time I've spent endless hours and countless dollars trying to track down seminal recordings, scouring for band history, and so on.

Fast forward to 2008, and it all adds up to me having waited a long, long, LONG time to see Green River.

The path they blazed – and the mark they left on Seattle music history — is undeniably deep.

Formed in 1984, the band (check this cast – some of who rotated in over the band's tenure: Stone Gossard, Jeff Ament, Mark Arm, Steve Turner, Bruce Fairweather, and Alex Vincent {Shumway}) laid the foundation for what would come next. Without Green River, who knows if the world ever would have seen Mudhoney, Love Battery, Mother Love Bone, or Pearl Jam?

Tonight, edging toward the end of this stellar two-day fete in honor of Sub Pop's birthday, the band that was once only the stuff of lore took the stage and became reality. There stood Arm, Ament, Fairweather, Turner, Gossard, and Shumway in the flesh. For a little longer than their allotted 40 minutes, they churned out song after song of sludgy, dirty, ooze-worthy rock that made some journo 15 years ago refer to this as "grunge." As the set picked up pace, hungry youngsters hoisted themselves on stage and jumped into the crowd to surf. Others thrashed to begin the requisite mosh pit. While yet others lifted their hands in the air, digital cameras at outstretched arms' length, trying to document this whole endeavor. As yesterday during The Vaselines' set, Kim Thayil of Soundgarden stood stage right, rocking out along with the rest of us at this moment.

Were Green River great? It's difficult to conjure the band as truly great songwriters; it's always challenging to discern greatness through all that muck. But the band chugged through riffs, wailed on hotlicks, screamed out verses, and made fists soar into the air all around me. So yes, they absolutely achieved their goal and set right oodles of music-lovers' hearts around me who no doubt always felt jilted that they never got to see this band live. Huge grins crept across all six band members' faces throughout their set — more than once, I caught Ament and Fairweather, and Turner and Gossard, exchanging looks of pure joy. Clearly it was good to be so appreciated. And appreciated they were: after the set, the band doled out probably a hundred shirts emblazoned with their name. The fans swarmed the stage trying to get a piece of collateral to prove that yes, this really did happen.

Given the amazing response, I wouldn't be surprised if it happens again. Completely worth the multi-decade-long wait.