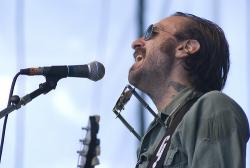 "So, this is our first reunion in 20 years," jokingly quipped Mat Brooke as Grand Archives took the stage and gracefully eased into the carefree "Miniature Birds."

Grand Archives were a great way to start this slow Sunday, helping me ease back into festival mode after a long and fantastic day yesterday. "Thanks for getting out of bed and coming to see us," said the band in gratitude. Their sweet vocal harmonies, lilting tempos, and quiet melodies awakened my senses as the mid-day sun began to filter through Marymoor Park's trees.

Most of the set, played to a very small crowd, contained material off the band's self-titled release, though they introduced one new song. I feel badly for the bands who get slotted on these early shifts, as folks are just trickling in, sparsely dotting the park grounds.

Missing from this show, as compared to the last time I saw GA at The Triple Door, was the gaggle of special guests to help the band on vocals and backup harmonies. I couldn't realistically have expected such stars to align yet again, but I can't deny that I ached for that special something. Without the wistful harmonies of Jenn Ghetto, for instance, some of these tracks fell flat here today.

The quietness of the bulk of the set helped quell the growing summer heat and keep the mood mellow. But when the band concluded with the rousing (and significantly louder) "The Crime Window" — which last time I sugested should have been their closer — heads began bobbing and folks seemed a bit more alert again.

Bring on the onslaught of quirky noise about to hit us from just-announced Blitzen Trapper.