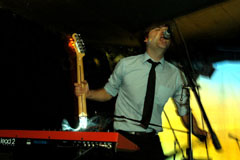 Our crazy theory for who is headlining SP20 tonight

Liz and I aren't at SP20 so we have time speculate and we've got a good working theory that there's a magical secret headliner tonight and it's going to be the Postal Service.

That's our theory and we're sticking to it.