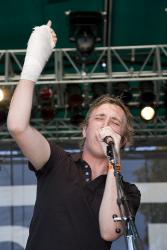 I prepared for the worst and left my house super early in order to beat the crowds to Sub Pop 20. Since the 520 bridge was closed, I predicted a mad crush on the 405 and at the entrance to Marymoor Park. Pleasantly surprised, I cruised right in! I think a lot of people must be coming later to see the bigger-named bands. I killed a little time before my first band of the day, the Constantines, from Ontario. They set up a Korg organ with a bunch of effects pedals and I noticed that one of the dudes has a broken hand. The set began with very little fanfare, one second they were tuning, the next they were in full swing.

I must mention, this is a very cute band. They started out a little self-conscious, except for the bassist, who kept playing his guitar backwards and raised up over his head. I didn't realize it at first, but this was indicative of how the entire band would play – lots of wackiness, and probably not just a little chemically induced. They started a little sleepy but still rocked. The crowd seemed to like it well einough as well.

Second song started with urgent top notes and a heavy-handed bassline underneath. It got a little jammy there in the middle, and then the organ kicked in and the whole song sped up. I'm not one for jam bands, but it was still quite a little toe-tapper. Vocalist Bryan Webb really projects a young, neo-Joe Cocker kind of vibe and the whole band seemed a lot more relaxed and animated, perhaps because their MDMA finally kicked in? I kid, I kid. Maybe. The kid with the broken hand ran in here and there to sing a few songs. At times I was really reminded of old-school Allman Brothers (I'm sure more than a few of you will argue with me on this) and the whole style was very classic 70's drug-infused rock.

A lot of their songs ended very abruptly and later in the set the music seemed more up-to-date in style, reminding me at times of The The and Fugazi. Julie from Eric's Trip showed up to sing a sweet little song called "I've Got a Girl Problem." She was cute and helped diffuse a little of the heavy-osity going on up there. The set finished with another guest vocalist (unfortunately I didn't catch his name. Did anyone else?) came out to do a Rolling Stones cover, but left before the song even really ended! Then as abruptly as it began, the Constantines set was over.