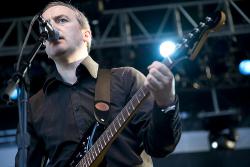 Before today, I'd never seen Glasgow's the Vaselines. And if anyone out there can say they have, well, you must have been abroad or on the eastern seaboard of the US last week – because this short was the first-ever stint in the US. Their stuff is of much lore. After all, Kurt Cobain covered not one but three of their songs ("Molly's Lips," "Son of a Gun," and "Jesus Doesn't Want me for a Sunbeam") and named his daughter after chanteuse Frances McKee.

The Vaselines spent most of their recording career on other labels, but it was Sub Pop who released The Way of the Vaselines: A Complete History, in 1992.

The Vaselines. Photo by Shawn Brackbill.

So I never did see the Vaselines (formed in 1986), but I did see Eugene Kelly's awesome next project, Eugenius, ages ago when they opened for Mudhoney at that fateful, wonderful show at the Mercer Arena. Mudhoney were great that night, but it was Eugenius dumfounded me with their spunk.

Judging from the local stars in plenitude around me (I spotted a sweaty Mark Arm from Mudhoney, fresh off his set, Kim Thayil from Soundgarden sporting a Sunn-O shirt, and Eddie Vedder and his daughter on stage, watching the band), this trip of theirs across the pond was a big freaking deal.

The sweet Scots wend their way through their 40-minute set, hitting all the highlights — including the tracks made famous by Nirvana.

"If you've been wondering why it's been so long since we've played," joked McKee, "it's because I've been kidnapped." She and Kelly proceeded to make repeated lewd jokes throughout their set, and concluded with the sexually tense, dance-club hit "You Think You're a Man." All around, indie rockers and aging hipsters alike smiled and danced as the banter continued.

It may be going on two decades past due, but somewhere, Kurt Cobain is smiling.