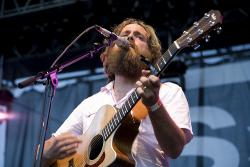 Ok y'all, everyone knows how much heather b. loves Iron & Wine, so needless to say this was my most anticipated performance of the day. Sam Beam took the stage just around sunset. When I've seen him perform in the past, he's had a backing band or at least his sister there to accompany him vocally, so it was unusual to see him alone on stage with only his guitar.

Also unusual was how chatty he was with the audience. In good form, he congratulated Sub Pop and also mentioned how much he enjoyed the Mudhoney show. After a little more audience banter, he launched into a nice rendition of "The Trapese Singer," varying the speed a little here and there. The lyric "…and fuck the man" was met with much crowd appreciation.

Now, I'm not normally a lyrics person, but I do make an exception for Iron & Wine. His words are just so profound, and in this setting, his acoustic guitar was just an accompaniment for his sentiments in this venue. His second song was "Upward Over the Mountain" off The Creek That Drank The Cradle. It was a little speedier than the album version, but the feeling of the song wasn't lost in the variation. One thing I always say about Iron & Wine is that the songs make you have memories of stuff that didn't happen to you, and this song is a prime example. I've never even had a dog! The acoustic presence was very clean and he whistled the refrain at the end.

Beam is a very gracious performer and involved the crowd quite a bit in his set. After quite a bit of difficulty launching into his 3rd song ("I haven't played in a while, this is embarrassing. Y'all are making me nervous! We'll come back to this one."), he gave up and started "Peace Beneath the City," encouraging the audience to clap along, continuing into a fairly country-fried version of "The Shepherd's Dog" and then finally lauching into "Naked As We Came." The audience swooned in a collective sigh over that one. It could not have been sweeter or more perfectly played, that's for sure. When he finished, Beam let us know that he finds the idea of people having sex to that song a bit unsettling and that he'd rather not know about these kinds of things. Heh.

Then finally, what I had been waiting for, "Boy With A Coin." I don't care how overplayed this song might be, I love it so much lately, so I was happy he finally played it (I knew he would). It was a pretty simple version, the spanish guitar trappings were faint and Beam is apparently quite rusty at playing live, but he had fun with it. The audience clapped along and overran him at the end, so he finished with a speedy little flourish and ended with a chuckle.

He opened the next tune by thanking Ben Gibbard, so we all knew what was coming and the audience were all squealing before he began "Such Great Heights." Unfortunately, he bricked on all the lyrics and the audience had to help him along! Once he found his way and hit that chorus though, oy… it was just so beautiful; his voice was simply made to sing this song. As he finished he asked, "I wonder how many people have sex to THAT song?"

He threatened to finish his set with some Skynard ("Don't ask for it, I'll do it!" but actually closed out with "Woman King," which I found an odd closer for this set, but who the hell really cares? After an abrupt ending to the song, Beam closed with a short "Happy Anniversary Sub Pop! Thanks for everything!" and he was out. Sweet.