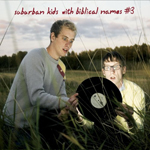 I give up. Honestly. If you need any further proof of the ridiculously outstanding Swedish music scene, Suburban Kids with Biblical Names is it. Sure, if you haven't been convinced by, oh, the Concretes, Jens Lekman, Jose Gonzalez, Frida Hyvonen or the Knife, then you've likely been living on Mars hanging out with the rovers with your fingers in your screaming "La la la la la." I might as well stop deluding myself and begin to figure how hard is it to emigrate to Sweden and enjoy their socialist utopia where apparently everyone becomes a fabulous musician. At this point, to cop a phrase from ESPN, you can't hope to stop Sweden, you can only hope to contain it.

All that being said, Suburban Kids with Biblical Names just makes me feel silly-good. They're hard to pigeon-hole, a little bit Lekman, a little bit Postal Service, a little bit Pavement, a little bit Islands and maybe you begin to surround the sound of Suburban Kids' latest effort, #3, re-released on Minty Fresh Records. The record is a whole pile of fun that just makes you want to listen to it again and again (and again). The undeniable charm of Suburban Kids is apparent right off the bat on the opener, "Marry Me," a clear and sincere love song that sounds like a Jen Lekman outtake right down to the charmingly mispronounced "finances" ("fey-nan-cees"). The album veer into Postal Service/Dntel territory on "Loop Duplicate My Heart," a song with limitless energy combining lightly plucked guitars and swirling synthesizers.

If anything, you could see Suburban Kids as some sort of Scandinavian They Might Be Giants, especially on gems of songs like "Trees & Squirrels" where they sing "The trees are wild and indisputably beautiful today/you can see the squirrels on their beautiful parade". The song is quite the toe-tapper with a quirky rhythm section of layered handclaps and sticks that break into a marching rhythm and horns at the bridge of "I don't know what you've been told/but I'm gonna have some fun tonight". Quirky lyrics (a key trait of the Swede bands) abound, with gems like "I noticed she's been listening to a lot of Joy Division lately/and I've noticed that darkness in her smile" ("Love Will") or "don't have the nerve to ask for food/and die of thrist in the back of rented wrecks" ("Rent a Wreck").

The lush arrangement of "Funeral Face" is an excellent example of juxtaposing an infectious, cheery guitar line and somewhat disturbing lyrics ("I know it will happen/the sun will go murder the snow"). The music creates such a mood of fun and enjoyment, you almost don't notice when the chorus of "Peter's Dream" is merely "blah blah blah blah".

The most Islands/Unicorns style turn on #3 could be "Shitty Weekend" and "Noodles" where the vocals blend in and out of the richly textured guitars and pianos, flutes or whatever else that was lying around combined with tempo shifts and harmonies that would make any music nerd giddy with glee. Possibly the oddest track might be "Little Boys in the Ghetto," a sweet song that features softly drifting guitar plucking, soaring vocals and, well, a human beatbox. It starts off with a song that could be from a Fat Boys album, but they bring it together so smoothly with the rest of their sound you wonder why more indie bands don't use a human beatbox.

However, the apex of the album might be "Seems to be on My Mind," a song that almost defies description. The best I can handle is if Johnny Cash ended up as a member of Tullycraft (I'll pause here and let that set in). The staccato opening rumbles into the country-style guitars and the deeply intoned and quickly delivered vocals are like a bizarro-world version of "Folsom Prison Blues" if it was a love song. When you combine that with the catchiest chorus this side of, well, anything and an unexpected tempo change halfway through that breaks down into a whistle solo, well, you have a song that might be the sweetest almost three minutes of the year.

With winter beginning to creep in and the days getting shorter quickly, everyone needs a beam of sunshine like #3 to keep your spirits up. Maybe it is the extreme seasonality of Scandinavian that creates bands with such sincere good feelings. Suburban Kids with Biblical Names seem to be the icing on the cake of the new Swedish invasion, bringing together so many different sounds and moods into a cohesive marvel that leaves you feeling a little startled by how refreshing the album actually is. So, rather than wait for the rest of the bands to filter their way states-ward, I'll be busy memorizing keep phrases in Swedish and booking my flight to Stockholm. (Or if that fails, I could just hang out in Ballard a lot, eh?) Fortsätta klippa, Sverige!