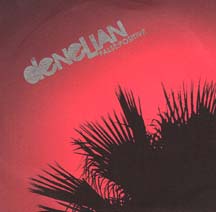 A couple years ago, vocalist and guitarist Kelly Dale used to front the pop/goth-tinged band Armband Radio. They only played out a few times locally and never quite got off the ground. But for all those tirelessly nostalgic new wave revivalists, you'll be happy to hear that Dale has a new outfit called Denelian. A few years ago I reviewed Armband Radio with the obligatory recommended if you like-ism here: "This is somewhere between Echo and the Bunnymen without the Ian McCollough asshole schtick and Interpol without guiltily channeling the nostalgia of Joy Division."

Well, nothing really has changed since then, except Denelian is better. But there are a few drawbacks.

First, Denelian is a little predictable in a these-guys-have-really-thorough-new wave-CD-collections kind of way. I almost get the feeling that I'm listening to the Valley Girl soundtrack ala 1983. But instead of hearing Modern English's "Melt with You," I'm hearing a Denelian cut. Depending on the reader, that's either good or bad. Second, Dale will get accused of sounding like Ian Curtis, that dude from Interpol, Paul Banks, or worse, the singer from She Wants Revenge. It's too bad cause Dale's voice is good. And I honestly don't think it's a case of copy-cat-ism as much as he just happens to sing in a lower register.

To be honest, there's nothing new here. I for one kind of tired of the new wave comeback sometime after hearing Magnetic Field's The Charm of the Highway Strip in '98. But there's no denying that Denelian writes solid pop tunes and that's what makes all the difference here.