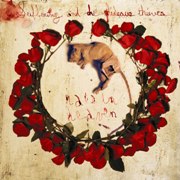 The first time I saw Suffering and the Hideous Thieves, my first thought was, "dude, that guy's having a seizure… isn't someone gonna make sure he's okay?" Well, he's not.

Imagine if Nick Cave had been less poetic and more visceral about his Murder Ballads. Each of the first seven songs on Rats in Heaven feature the words "flesh" or "blood" and variations on those images (crimson stains, puckering veins, death, decay… you get the idea). Just plain creepy stuff.

"Someone took away your innocence; shut you down a long, long time ago. You look haggard now, your skin's like a fish, a fucking mattress, your life's a mess. Your flesh became defiled by me…

Then moves on to:

Where is the love? At the end:

"Escape is so futile, but I don't regret a thing. There's nothing more beautiful than loving you."

The follow up song, "Souvenir," is even more disturbing:

"Nineteen years old with a gun, and a tank full of gas, we'll ride together never to return. Fully loaded, yeah drunk as hell, with you on my mind, the taste of your blood on my tongue…

Paging Charles Starkweather (look it up — though apparently the song is supposed to be more about Dahmer). Scary stuff. Cool stuff, but scary stuff.

The Suffering story is a little more complicated, though. Just when you think its time to block the doors and lock the windows, "Hush Little Girl" with it's lullaby-like lyrical structure promises protection, safety from "this rotting world" as the music builds to slight crescendos before returning to it's soothing verse (though, trust me, you'll never confuse this with "Rock-a-bye Baby").

Things spin even further to the light (and, again, in a somewhat strange way) on "Return," with an airy guitar figure and call-and-response lyrics that seem to call for The Rapture (that's as in the end of days, not the punk/funk band). Maybe they don't (just) want your skull on the mantle. Maybe they're nice boys after all. The faith is brought into sharp relief with an epic reading of "Amazing Grace." This version — at ten minutes plus — is made all their own, placing the undercurrent of pain and longing in the spiritual staple at front and center.

I rarely get so wrapped up in the lyrical content of a record, but the words convey the mood better than a description of the music does. I'll give it a shot (if only to better frame those words). The mood is dark (though track number one sounds, in spite of its title "There Is A Fountain Filled With Blood," like a strangely celebratory drunken sea shanty. Actually a lot of the album has a sing-a-long quality best appreciated when inebriated.). Vocal intensity ranges from a rough-hewn croon to agony-filled screams; the drumming often pounds, somewhat tribal. There's a lot of ingredients in this stew (as evidenced by the roster of contributors to the Hideous Thieves): guitar/bass/drums with heavy doses of piano, as well as strings, horns, moogs, accordion, Irish flute, toy piano, etc. Nick Cave is an apt starting point for comparisons — the songs feel more like late Bad Seeds era, but the intensity speaks much more to the Birthday Party level of darkness and on-the-edge-of-falling-apart-ed-ness (and no, it's not even close to a word, and no, I don't care).

As much as I like this record — and I like it a lot — the live show is even better, the chaos more real, and the intensity (of the performance), more terrifying. Though, as it turns out, none of these guys are serial killers*, so in the end, they're not quite as scary as you might think.

(*At least I don't think any of'em are serial killers.. that Joel guy looks kinda twitchy sometimes though…)