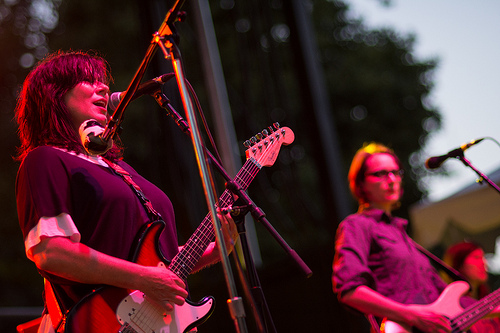 Sunday at Bumbershoot: BEST DAY EVER

I really don't know how this year's Sunday installment of Bumbershoot could have been any better, save for maybe being carried around on a fluffy couch while being fanned and fed grapes, I guess? In all seriousness, though: Sunday really was the best fucking day ever. From the moment I stepped foot on Seattle Center grounds to finally flopping into the passenger seat of my buddy's car sometime before midnight, I had an absolute blast. Here's a few shots of what I managed to pack into my day: 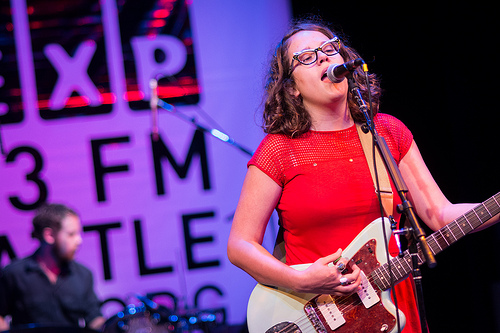 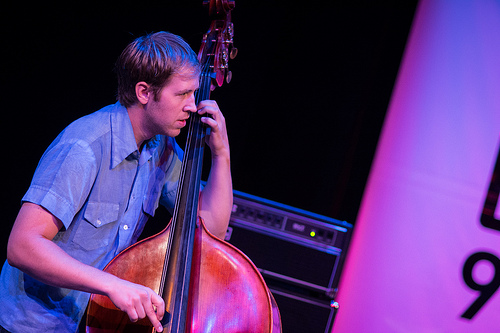 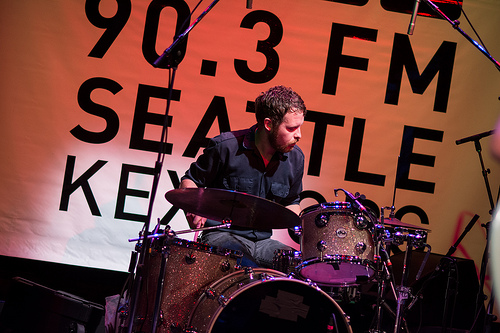 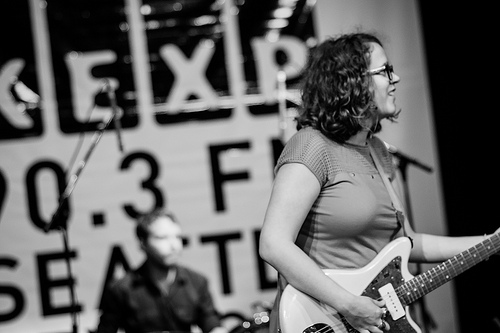 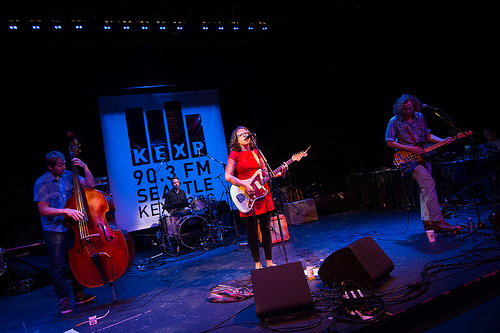 After grabbing a quad iced espresso at the LQA Caffe Vita, I beelined over to KEXP's Music Lounge for Sallie Ford and the Sound Outside. I know I've said it over and over and over again, but I really, REALLY love this band, you guys. Since first seeing them at the Fremont Abbey with Hey Marseilles back in 2009, I've watched (and heard) their whole band-persona evolve from sweet-sounding alt.rock-a-betty to a matured, melodic-yet-gritty storytelling vibe — with each show that passes, they just keep getting better and better. True to recent form, Sunday's set did not disappoint, as the band delivered thirty straight minutes of super-tight jams, mostly off of the new record, Untamed Beast. {You'll be able to hear the whole session in the KEXP archive here, as soon as they have it posted. Highly recommended!!}

At the stroke of 12:30, I hightailed it over to the Words and Ideas stage to catch the last portion of the Barsuk panel, featuring Sean Nelson, Dave Bazan, and John Roderick talking all things Barsuk-y with label co-founder Josh Rosenfeld. It was most excellent to hear such lengthy, knowledgeable discussion in such an intimate setting, with topics ranging from Death Cab for Cutie to the saga of Pitchfork v. the Travis Morrison solo album and the indoctrination of Nada Surf into the Barsuk family. A+, gents. 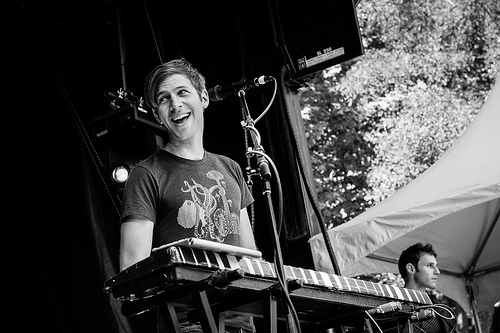 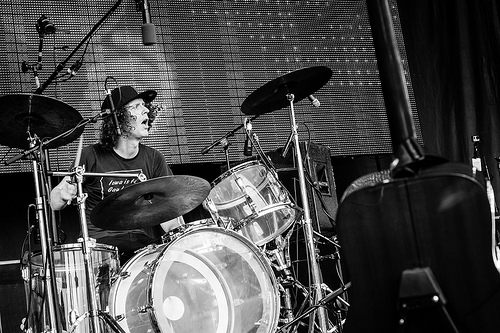 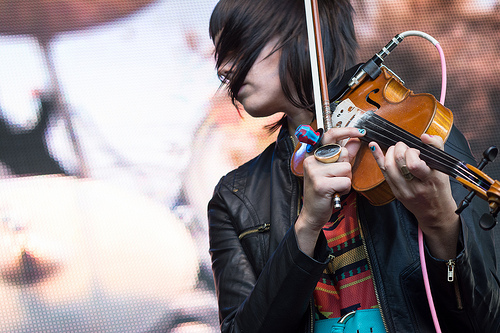 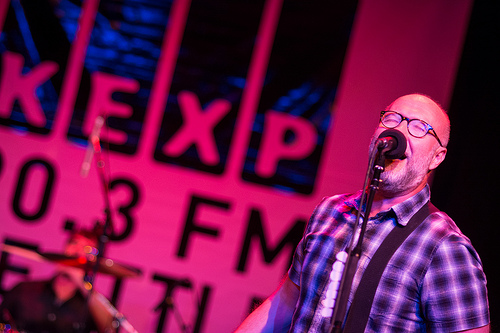 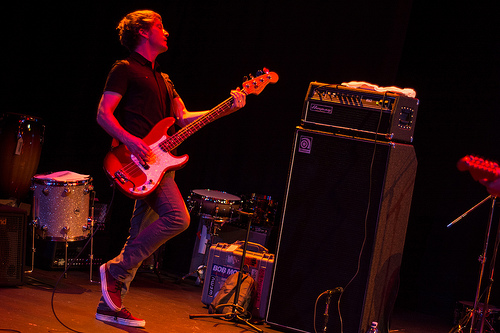 We caught a couple of tunes from Portland's Ramona Falls before hustling back to the KEXP lounge for a set from Bob Mould. Holy fucking shit. BOB MOULD, you guys. These pictures don't really do the set any justice — Bob & Co. were tearing around the stage shredding the crap out of the performance, and I was sitting in the second row all mouth-agape, barely able to take it in. Almost every photo I took was a blurred mess, so you'll just have to imagine how truly excellent it was to behold, at least until KEXP archives the performance at their site {keep an eye here for it to pop up sometime in the next week or two} and until our friend Laura gets more photos to us to post. Full frontal face-rocking-off!! So. Good. 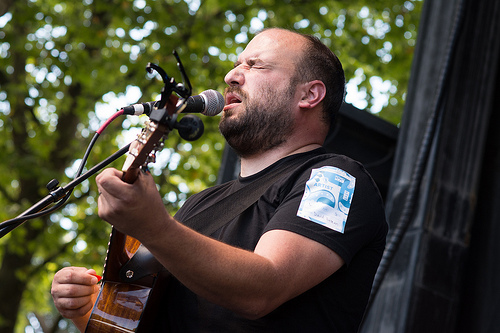 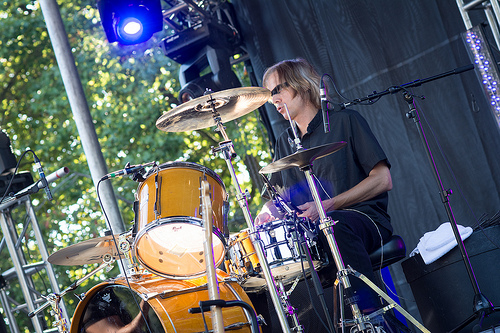 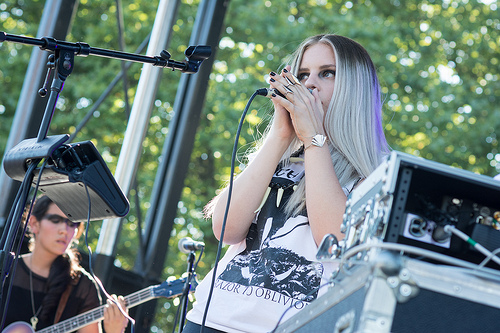 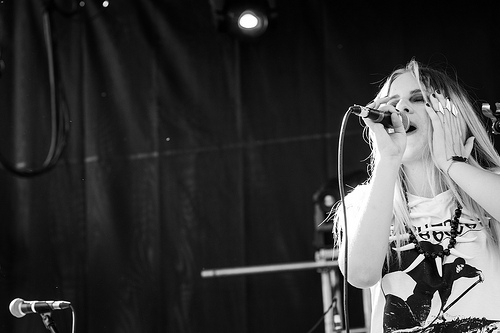 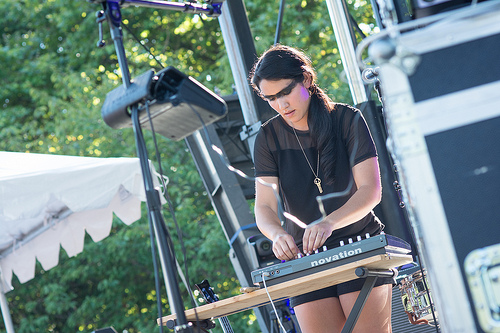 Catching part of Dave Bazan's set was excellent, however, the combination of a solo performance (a little sad for a sunny afternoon — I had my fingers crossed for full band) with the noise of the beer garden kind of botched the vibe. But a bit later, Katie Kate managed to bring it all together perfectly — sun and sweat in our eyes, killer beats from Trent Moorman, and a blistering, pulsing performance that had the whole crowd rapt with attention. She rules the stage in a way that few do.

In addition to the musical component of Bumbershoot, I've always appreciated the visual arts — Flatstock and the Reel Grrls exhibit this year were no exception, and both excellent — but I'd never put in the effort to take in a comedy set. We took a shot at it and managed to get great seats for Patton Oswalt and Friends, and let me tell (those of) you (who, like me, have never done the comedy hang before): it is an EXCELLENT add-on component to your artsy-fartsy / band-emo time at Seattle Center, and you should probably see at least one or two acts every Bumbershoot. I knew going into it that Patton Oswalt was a funny motherfucker, but I was completely unprepared for the side-splitting experience I ended up having. His direct warmup, Morgan Murphy, had us in hysterics / tears — covering everything from drugs to relationships to blowjobs — and Patton knocked us out of the park, managing to balance out dad-antics and the adorableness of his four-year-old daughter with quips about concentration camps. (No kidding!) ("CARBS.") 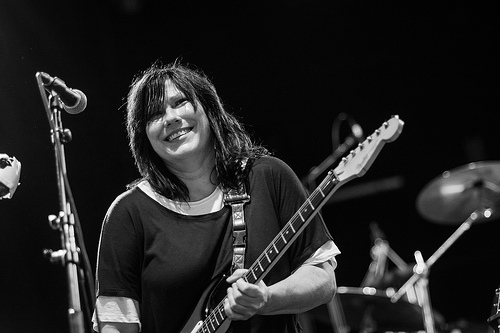 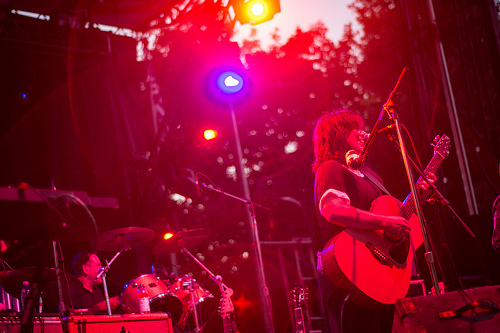 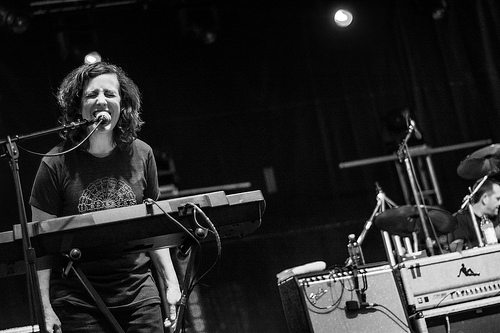 Last up on the camera-docket for the night was a set from the Breeders, be still my ever-beating I-love-the-90s heart. Each guitar strum, each downbeat was a flashback to my end-of-high school years, a sonic landscape of younger, crazier times. Last Splash seemed to just pour out of the band and onto the crowd of (what seemed like) thousands of people in front of the TuneIn stage, new news for some, an old familiar friend for others. Not only did the set totally kill, but bonus points need to be issued for breaking the old "don't wear your own band's t-shirt on stage" rule — because you are the Breeders and you can do whatever the fuck you want.

Laura and I closed out the night with part of The Zombies' set, and then followed it with a mad dash over to Key Arena to try to find seats for Death Cab for Cutie. We wound up just above and behind the band in the top section, stage left; fully prepared for bad sightlines and terrible sound-bounce — and what we got was a clear view and A+ acoustics. Seeing Transatlanticism live was a setlist-dream come true, with familiar tracks bleeding one into the next: "Tiny Vessels" compounding every Breakup Feeling I'd ever had, "We Looked Like Giants" going on for what felt like hours (double-drumkits included). Having seen DCfC in smaller venues, I was worried that something would get lost in that huge space, but instead, it was more of a true testament to the band's growth and professionalism: the set was larger-than-life but still felt intimate and personal, songs like "Passenger Seat" still translating perfectly, even in the midst of a 10,000-person crowd.

Save for some killer snacks (I LOVE YOU DUMPLING CZAR) and hilarious people-watching, that was most of Sunday's adventure. Stay tuned for more, including a recap of All Of The Charles Bradley Emotions (with photos!), Gary Numan's KEXP lounge set, and more!